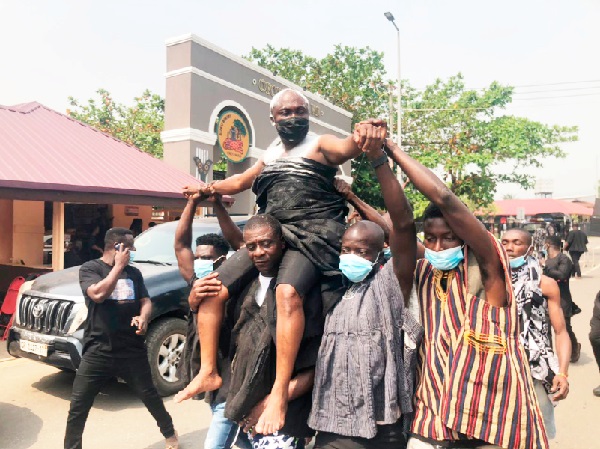 A private legal practitioner, Mr Yaw Oppong, has been enstooled the Manwerehene of Akyem Abuakwa, with the stool name Omansunfuo Barima Oppong Kodiee.

Barima Kodiee, an author, law lecturer and one of the lawyers who defended President Nana Addo Dankwa Akufo-Addo in the 2020 Presidential Election Petition, became the Manwerehene on the back of his contribution and service to Akyem Abuakwa and the Ofori Panin Stool.

He officially assumed office last Saturday after a colourful ceremony at Kyebi, the capital of Akyem Abuakwa, where he swore the oath of allegiance to the Okyenhene, Osagyefuo Amotia Ofori Panin.

Osagyefuo Ofori Panin said the honour bestowed on Barima Kodiee was as a result of his unwavering and unflinching service to Akyem Abuakwa over many years.

He said it was important for leaders to understand that service to people in humility and truth was the cornerstone of leadership, adding that even Jesus Christ, with all his glory, served with humility.

“There is power in service in humility. Service with truth, love and humility and unity will develop Okyeman and Ghana as a whole,” he said.

In an interview, the Manwerehene said his role was to be the chief confidant of the Okyenhene, and in view of that, he would support his overlord to achieve his objectives as a King.

For instance, he said, the Okyenhene remained a known environmentalist, who had made the protection of the environment and the campaign against illegal mining a hallmark of his reign.

“I will support his Majesty in this regard and also help him to achieve his dreams and vision,” he said.

He thanked the Okyenhene and Okyenman for the confidence reposed in him, and for the honour to serve the people.