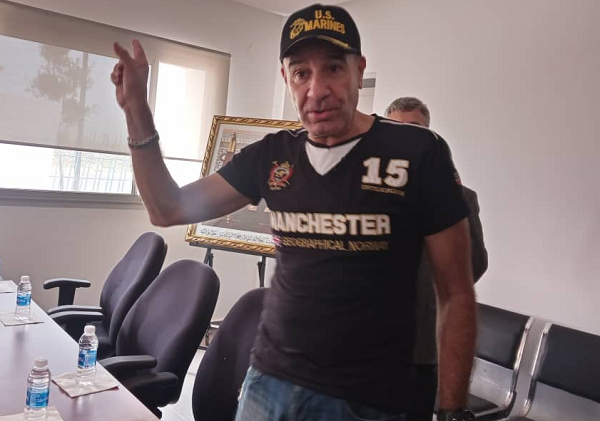 The Head of Cooperation and Information Systems of the Ministerial Conference on Fisheries Cooperation among African States Bordering the Atlantic Ocean (ATLAFCO) Secretariat in Morocco, Abdennaji Laamrich, explaining a point to the journalists Follow @Graphicgh

Lack of knowledge and capacity to effectively monitor territorial waters and fishing vessels in African countries are contributing to the expansion of illegal, unreported and unregulated (IUU) fishing practices on the continent.

The above observation is by Abdennaji Laamrich, the Head of Cooperation and Information Systems of the Ministerial Conference on Fisheries Cooperation among African States Bordering the Atlantic Ocean (ATLAFCO) Secretariat in Morocco.

He said IUU fishing contributes to overexploitation of fish stocks and is a hindrance to the recovery of fish populations and ecosystems.

For him, IUU fishing “represents unfair competition for fishers who exploit fish resources legally and adversely affects the economic and social well-being of fishing communities.”

Mr Laamrich made the observation during the opening of a three-day seminar, organised for 22 selected journalists and media practitioners from the ATFLAFCO member states in Agadir, Morocco, on May 5, 2022.

The seminar, which was on the theme: “Medias for sustainable development of fisheries and aquaculture’’ was organised by the ATLAFCO Secretariat in collaboration with the Media Observatory for Sustainable Fishing in Africa (MOSFA), a network of fisheries journalists in Africa.

The seminar was meant to provide the beneficiary journalists and media practitioners new insights into the fisheries sector and the communication tools needed to present the most pressing issues of fisheries and related coastal issues, climate change, erosion, land use planning and aquaculture issues such as pollution and fish diseases.

ATLAFCO is an intergovernmental organisation founded in 1989, gathering 22 countries in Africa, stretching from Morocco to Namibia.
The main objective of ATLAFCO is to ensure effective and active cooperation between member states for the preservation of fishery resources and the sustainable development of fisheries in the African region.

IUU is a collection of dishonest fishing practices, both on the high seas and in areas within national jurisdiction that threatens global geo-political security and prosperity and weakens rules-based order; especially as the worldwide demand for fish as a protein source continues to grow

He noted that IUU fishing “Negatively affects the livelihoods of people who depend on fisheries in the African coastal countries,” saying “Regardless of where we live, the food we eat, and the language we speak, we all rely on the oceans to keep us alive. Illegal, Unreported, and Unregulated (IUU) fishing threatens this vital resource.”

For him, the expansion of IUU fishing in Africa was leading many African coastal countries to pay the highest price for IUU, attributing the expansion of the practice ineffective observer programme for monitoring fishing activities of licensed vessels, poor logistics for offshore fisheries surveillance, weak systems for vessel registration and licensing, and lack of regional collaboration for the Monitoring, control and surveillance (MCS) systems.

Mr Laamrich said West African waters “are estimated to have the highest levels of IUU fishing in the world as a proportion of the region’s total catch,” noting that IUU fishing was undermining the productivity of fisheries in Africa, depriving many communities of their revenues, and exacerbating insidiously unemployment, malnutrition and food insecurity in many African regions.

He said West African waters are estimated to have the highest levels of IUU fishing in the world as a proportion of the region’s total catch.

For his part, the Executive Secretary of ATLAFCO, Mr Abdelouahed Benabbbou, said the ATLAFCO Secretariat would work with the government of its member states to stump the menace of IUU fishing on the continent’s waters.

He said the Moroccan government through the ATLAFCO Secretariat had rolled out a number of programmes to help build the capacities of ATLAFCO member states to fight IUU fishing.

He, however, called on African journalists and media practitioners to help the fight against IUU fishing on the continent through education, sensitisation and advocacy.