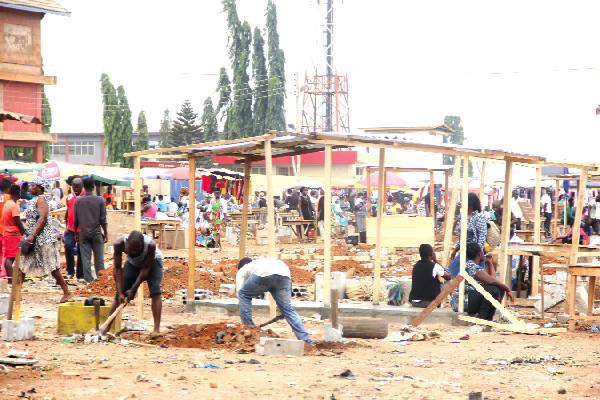 Some traders constructing structures for their wares at the Redco Market. Picture: Maxwell Ocloo
30.5k Shares

The La-Nkwantanang Madina-Municipal Assembly (LaNMMA) has begun a decongestion exercise to rid the pavements and footbridges in the municipality of hawkers and traders.

The assembly has, however, assigned a new place where the traders and hawkers can ply their trade without obstructing the flow of vehicular and human traffic.

The exercise, which is expected to continue for weeks, has already affected Madina-Zongo, the Madina Post Office area, Atomic, Zongo and Ritz junctions.

According to officials of the assembly, the activities of the traders and hawkers impeded the flow of vehicular and human traffic and also contributed to the generation of garbage along the major streets in the municipality.

The Municipal Coordinating Director, Mr Charles Ashalley Djane, who led a team of the assembly’s taskforce and policemen to demolish makeshift structures on unapproved places, told newsmen that the decongestion exercise would improve movement and rid the area of filth.

He said the move was also to enforce the assembly’s bye-laws and create a new order to instil discipline in the city, especially among the traders and hawkers.

“We are encouraging all the hawkers and the petty traders to move back into the markets. We want to fashion a strategy to be able to sustain it,” Mr Djane said.

According to him, the assembly was poised to make the exercise sustainable and warned all shop owners who extended their trading activities to the walkways and dumped refuse on the streets to desist from doing so or risk being chased out.

In May this year, the LaNMMA carried out a similar demolition exercise at the Redco Flats to rid the area of suspected criminals.

About 5,000 people, including other nationals, had their properties demolished.

Some of the traders who spoke to the Daily Graphic after they were relacated to their new locations commended the local assembly for keeping its promise.

Madam Mary Safoa said when the news of decongestion got to them, most of them were scared, and others decided to look elsewhere.

She said her enquiries revealed that the assembly was not only going to clear them but was also going to relocate them to sell their wares.

“I am not just happy but what amazes me is that the assembly has also provided us with a borehole, a 14-seater washroom for males and females,” she said.