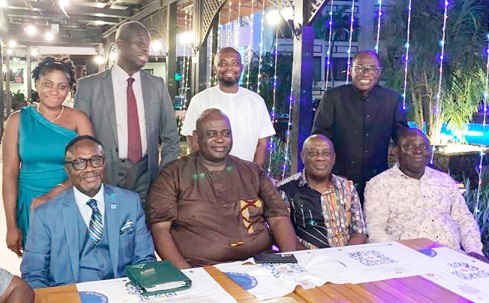 Odeneho K. K. Kyeremanteng (2nd from left), President of the Konongo Odumase Old Students Association, with some members of the Board of Trustees of the Endowment Fund after their inauguration
30.5k Shares

The Old Students Association of the Konongo Odumase Senior High School (Anuanom) has launched an education endowment fund to support academic and infrastructural development in the school.

To be known as the ‘Koss Endowment Fund’, it will also be used to support the school through the acquisition of teaching and learning materials to enhance the academic performance of the students.

It will also be used to support brilliant but financially challenged students who want to pursue programmes in the school.

The launch of the fund forms part of activities to kick-start the 70th anniversary of the establishment of the institution, which will be commemorated next year.

An amount of GH¢5 million is expected to be raised for the fund, which will eventually be revolving.

A 17-member Board of Trustees has consequently been inaugurated to spearhead the management of the fund and to mobilise resources into it.

The event to launch the fund and inaugurate the Board attracted many prominent personalities who are old students of the school, including

The President of the Old Students Association, Nana Odeneho Kweku Kyeremanteng, said the inauguration signified that the association and the school at large were placing their destiny in the hands of the board.

He said all members of the board were experienced people who had distinguished themselves in society and their careers; for that matter, they were capable of delivering on their mandate.

“With your varied professional background and experience, we will like to entreat you to bring your experience to bear in the administration of the fund and run it in a transparent and efficient manner to ensure the resources entrusted to you are used to the benefit of the school,” Odeneho Kyeremanteng emphasised.

Rev. Boafo, in his acceptance speech, pledged on behalf of the new board to do all that was possible to deliver on their mandate, which was to mobilise resources for the fund.

He also urged his fellow board members to work as a team in their commitment to support the school.

“We are here to work as a team for the benefit of our great school so there is no room for individualism.

“Our goal is to raise GH¢5 million and that is what we will do,” he said.

The Headmaster of the school, Dr Benjamin Kweku Baah, expressed his gratitude to the old students for “putting their money where their mouths are” with regard to helping the school develop.

He added that the association had supported the school in diverse ways over the years, noting that the school had recorded excellent performances in the WASSCE since 2019, particularly in the core subjects.

“It is a reflection of the fact that the old students are supporting us and I want to assure them that we will continue to offer good teaching and ensure that our students are disciplined so that the trust they have invested in us would yield better learning outcomes,” he said.