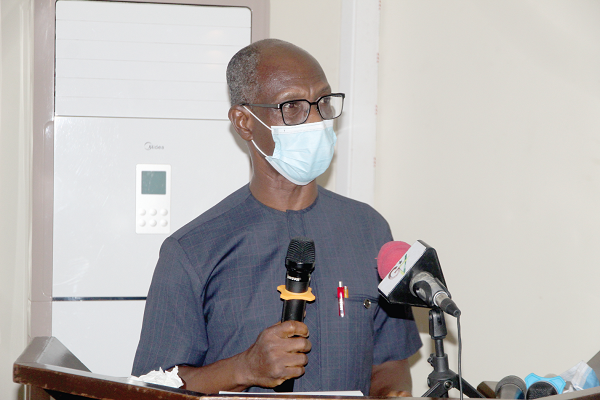 The surgery was done on two patients, aged two and four, last Friday, while another was done on a third patient, aged five, last Saturday.

A cochlear implant is a small, complex electronic device that can help provide a sense of sound to a person who is profoundly deaf or severely hard-of-hearing.

The implant consists of an external portion that sits behind the ear and a second portion that is surgically placed under the skin.

It gives access to sound by by-passing the non-functioning parts of the ear and electrically stimulating the cochlea, which is the inner part of the ear.

The groundbreaking surgeries were undertaken by a combined medical team from the KBTH and the Ear, Nose and Throat (ENT) Department of the University of Alexandria, Egypt.

The combined team was led by the Head of Cochlear Implantation at the Alexandria School of Medicine in Egypt, Professor Ahmed Mehanna, and the African Development and Regional Manager of the Med- EL Hearing Implant Company in Austria, Mr Mohamed El Disouey.

At a press briefing in Accra last Saturday, the Head of New Allied Surgery and ENT at the KBTH, Dr Kenneth Baidoo, explained that patients who could benefit were those who had their structure for hearing in place but it was not functioning.

Such patients, he said, would be taken through a process to evaluate them to be sure they could benefit from the procedure.

He indicated that the new technology would give rise to improved treatment options for patients with different ailments, including hearing impairment.

In addition, Dr Baidoo said, the new service would bring an end to the situation of people travelling outside the country to seek such services, as well as attract patients who needed cochlear implant services from other African countries.

“We want to build a world-class facility for services in ENT in Ghana and the West African sub-region.

Already, we have a high-class Head and Neck Unit and ENT is our next focus. We are in the process of training more staff to attain the highest we can,” he said.

Mr Disouey explained that the ear was made up of three parts — the outer, the middle and the inner ear.

The outer ear, he explained, was the part which could be seen, while the middle ear contained the ossicles, the smallest bones in the human body, which helped to carry sound from the outer to the inner ear.

The inner ear, he said, housed the cochlea, a snail-shaped, fluid-filled organ.

Mr Disouey said all those parts worked together to detect sound waves and change them into signals which could be understood by the brain as sound.

He said when a child was born with a hearing loss, known as sensorineural hearing loss (SNHL), it was the result of generic syndromes, infections such as meningitis or complications during pregnancy or birth.

Although SNHL was usually permanent, he said, it could be treated successfully with a cochlear implant.

How the implant works

After patients underwent the surgery, he said, they were provided with an audio processor which was worn either on or off the ear, depending on the model the patient chose.

He further explained that the audio processor was connected to the implant by a magnet, while the implant was placed under the skin during a straightforward surgical procedure.

After the surgery, he said, the implant would not be noticeable to anyone.