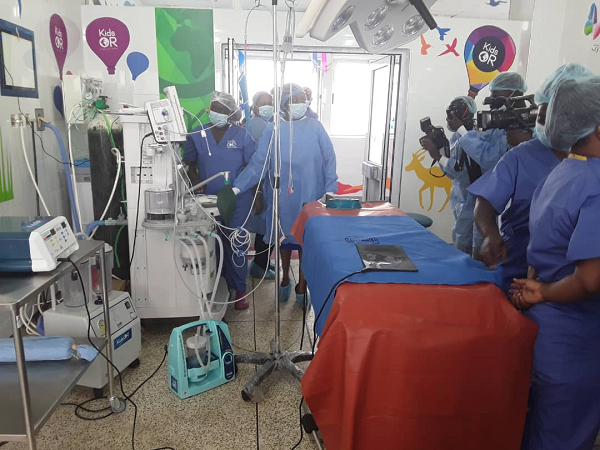 The operating theatres were to help the hospital devote attention solely to children in need of surgery and also help in the training of Paediatric Surgeons and Anaesthetists in the country.

KATH thus becomes the third health facility in the country after Korle Bu Teaching Hospital and Trust Hospital to have Paediatric Theatres.

Hitherto, the hospital did not have a dedicated operating theatre for kids and children in need of surgery had to compete with adults for the same theatres.


Speaking at a ceremony to hand over the facility to the hospital, the Head of the Directorate of the Surgery of KATH, Dr Charles Dally underscored the importance of having a dedicated operating theatre for children at every hospital in the country.

He said aside from ensuring that children were given the necessary attention and care, it also helps to build the human resource capacity of the hospitals as the medical personnel get the opportunity to work in more cases.

He said the establishment of a separate operating theatre for paediatric surgery in the context of a directorate of surgery “is long dream that has become a reality today.”

According to him, establishing such a separate operating theatre for paediatric surgery was always going to augment and facilitate the work of the unit.

Dr Dally said in the short period of time that the theatre has been operational since this year, “we have already seen an augmentation in output of paediatric surgery.”

In July, he said a total of 34 cases were done and increased to 81 cases in August, September, 64 cases “and in October so far, 41 patients have been operated in the KidsOR theatre.”

“So already, we are seeing a significant improvement, so this clearly justified the investment has been made in the establishment of this theatre,” he said.

On behalf of the directorate, he expressed management’s appreciation to the benefactors for the assistance which he said would go a long way to improve paediatric care in the country.

The Head of the Paediatric Surgery Unit, Dr Michael Amoah said paediatric theatres were much needed as children needed equal attention and services as adults but always had to compete with the adults for the same services.

“Before the new ORs were installed, we did not have a dedicated Operating Room for paediatric surgery, so we had to compete with adults, meaning we were only able to do around 40-45 paediatric procedures in a month and most of these were emergencies.

“The theatre was not paediatric-friendly. We had to use adult-sized tools and equipment to operate on small children.

“The KidsOR Operating Rooms will provide a safe environment for our patients and will shorten the waiting time for both electives and emergencies, thus reducing complications and mortality,” he said.

The Communications Officer for KidsOR, Muthoni Wahome,, for her part, acknowledged the role and impact the hospital has in meeting healthcare for the people particularly when it served as the only referral hospital within the middle belt of the country.

“These two Operating Rooms are much needed to ensure children receive quality surgical care in a timely manner,” she said.

According to her, the facility would enable KATH to train more paediatric surgeons and anaesthetists “as these State-of-the-Art theatres are training grounds for paediatric staff. This in turn means an increase in the number of paediatric workforce in the country which has a ripple effect towards achieving access to quality healthcare and health system strengthening.”

She said the installation at KATH marked a milestone for the organisation as it marked the 50th Operating Room installed since inception of the charity four years ago.