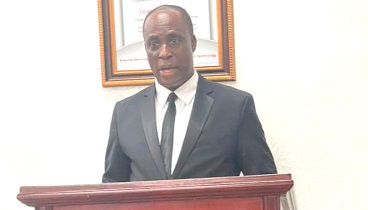 The Chief Executive Officer (CEO) of Kessben Group of Companies, Stephen Boateng, has refurbished the boardroom and the registrar’s office of the Faculty of Social Science of the Kwame Nkrumah University of Science and Technology (KNUST) at a cost of GH¢90,000.

The boardroom was refurbished with new curtains, a set of furniture and a 85-inch 14K smart television set for video conferencing, among other items.

At a ceremony to hand over the projects to the faculty, Mr Boateng — popularly known as Kessben — said his attention was drawn to the state of the boardroom by the authorities of the faculty and he readily accepted to undertake the project.

He said KNUST had played a significant role in building his capacity as a person and made a huge impact on his business.

Mr Boateng, who had his first and second degrees, and a Bachelor of Law (LL.B) programme all at the university, said his success story began at the Social Science Faculty, one of the beneficiaries of his latest benevolence.

"It is not to pay back for the knowledge imparted to me, but an appreciation for the transformation and reshaping of my life," he stated.

He expressed the hope that the facilities would be utilised properly.

The Dean of the Faculty, Prof. Eugenia Ampofo, praised Mr Boateng for his unflinching support to his alma mater.

She said his benevolence was overwhelming, and called on other Social Science alumni to emulate the gesture, stressing that there were a lot of unfinished business in the faculty building that needed external support to fix.