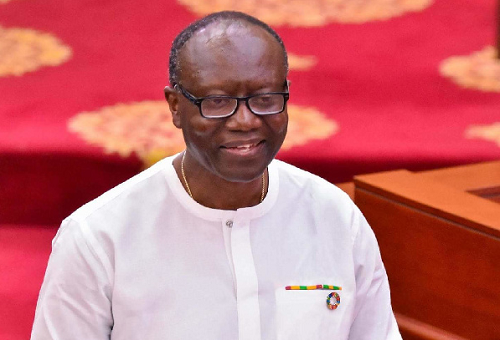 The Minister of Finance, Mr Ken Ofori-Atta, has refuted a corruption-risk assessment by the Special Prosecutor (SP) which concluded that the Gold Royalties Monetisation Transaction arrangement, popularly referred to as the Agyapa deal, is not transparent and could give rise to corruption.

Mr Ofori-Atta said the Agyapa deal was in the best interest of the country, was done with due process and was very “transparent from the onset”.

“The ministry believes that it has been transparent from the onset. Once the government had independently assessed the potential value of the transaction to Ghana and the Cabinet had approved the policy to monetise future gold royalties to support current developmental projects, the Ministry of Finance included, in the 2018 budget and economic statement, the government’s intention to leverage the future wealth of Ghana’s gold resources to support current developmental projects,” he said.

His response to the corruption-risk assessment by the SP, Mr Martin A. B. K. Amidu, was contained in memorandum submitted to the President, Nana Addo Dankwa Akufo-Addo, who asked him to make it public to enrich public discourse on the issue.

The SP concluded that the selection of Imara of South Africa, with its local partner, Databank, as transactional advisor “discloses a reasonable suspicion of bid rigging and corruption activity”.

He also accused Databank of being a “decoy” to Imara and further raised the point of the link the Finance Minister had with Databank.

“The Mandate Agreement does not say how and when the decoy, Databank of Ghana, was to be paid by Imara for a contract purportedly won and performed jointly,” the SP concluded.

In refuting the assessment, Mr Ofori-Atta said the condition that a transactional advisor partnered a local firm was not “alien or offensive to procurement practice or the Procurement Act”.

He also explained that the government was not paying separate fees to Imara and Databank.

“Since Imara bid for the transaction as a partnership, it was not in our place to provide separate fee payment streams for Imara and Databank in the Mandate Agreement,” he said.

He added that Imara and Databank were selected in compliance with the procurement laws of the country.

“The Ministry of Finance lawfully appointed Imara TA for the transaction, in compliance with Act 921, Act 663 (as amended) and the Constitution of Ghana. There was no intention by any party to disregard and violate the laws of Ghana. The ministry acted, at all times, in good faith throughout the transaction,” he said.

The minister said Imara and Databank had an impeccable record when it came to being advisors to such large-scale transactions.

“Imara is a leading independent asset management and investment banking firm in sub-Saharan Africa, with a reputation for providing quality financial advice for governments in Africa going back 60 years, with extensive experience in the natural resources sector in Africa.

“I co-founded Databank 30 years ago, which is now the leading investment bank in Ghana. Databank has been actively involved in virtually every initial public offering (IPO) of state enterprises under all governments in the Fourth Republic.

“In 1994, Databank advised the Rawlings administration during the liquidity crisis that threatened to cripple Ashanti Goldfields Company,” he added.

Mr Ofori-Atta stressed that he was no longer involved in the day-to-day business of Databank, as “I resigned as Executive Chair of Databank in August 2012 and resigned from all Databank boards in February 2014”.

President Akufo-Addo last Monday instructed the Minister of Finance to re-submit the agreements supporting the Agyapa deal to Parliament for the approval process to start all over again.

That followed the corruption-risk assessment submitted by Mr Amidu to the President.

The government passed the Minerals Income Investment Fund Act, 2018 (MIIF Act 978) with the key objective of maximising the county’s mineral wealth for the benefit of Ghanaians, while ensuring that receiving royalties from gold mining companies was sustainable.

The law was amended to enable it to incorporate subsidiaries and use it as a special purpose vehicle (SPV) to do business across the world.

The company will be responsible for managing 75.6 per cent of the country’s royalty inflow from the 12 gold mining companies that currently operate in Ghana, with four more expected to come on stream.

That will enable the country to raise about $1 billion to finance mining concessions in Ghana and across Africa.