Just kill us, shoot us! – Alleged secessionists roar in court 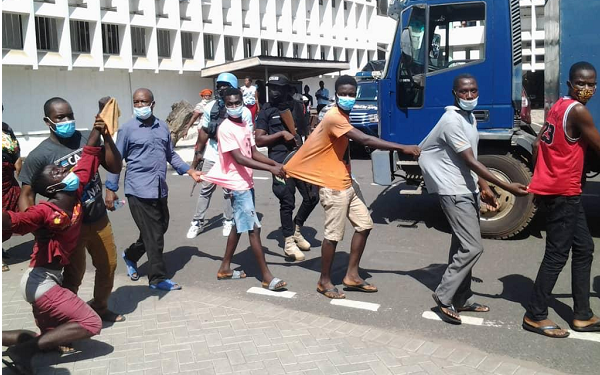 Some of the suspects leaving the court
30.5k Shares

“We did not do anything; just kill us. Take a gun and shoot us; it will be better.”

Those were the words of some suspected secessionists as they walked out of an Accra Circuit Court in deep tears yesterday.

They were part of the 68 suspects who allegedly engaged in unlawful acts in the Volta Region as they sought to break away from Ghana.

The alleged secessionists are standing trial on similar charges in at least five different circuit courts in Accra.

In an intriguing twist of events, the charges against the 68 were withdrawn yesterday, compelling the court to discharge them.

They were, however, rearrested immediately afterwards and re-arraigned before a single judge, Ms Rosemary Baah Tosu, in two batches that now included 10 others who appeared in court for the first time.

Their charges included conspiracy to commit crime, treason felony, participating in the campaign of a prohibited organisation, causing unlawful damage and rioting with weapons.

The prosecution claimed that, on September 25, 2020, the suspects had prepared to carry out, by unlawful means, an enterprise to usurp the Executive power of the state.

According to the charges, Isaac Kwesi Afeku and Richard Adri, aka Mumuni, both suspects in the case, caused damage to two Toyota Hiace mini buses, valued at GH¢1,000,000 and belonging to the State Transport Corporation.

Their plea was, however, not taken.

The court remanded them to assist with police investigations.

The court held that it was mindful of the facts of the case, and that the length of time needed to investigate the case had not been delayed by the prosecution, and consequently upheld the prosecution’s request for the suspects to be remanded.

The judge further ordered the prosecution to ensure that the accused persons were treated with care in custody.