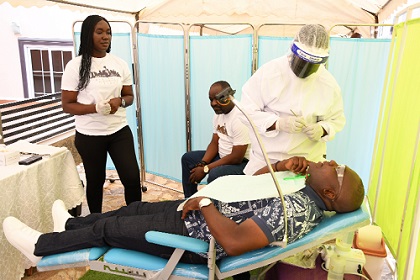 Staff members of JL Properties Limited have benefited from a free health screening exercise at the headquarters of the company in Accra.

In all, more than 100 residents of the Orleans Garden Estate, including staff of the company, took part in the exercise which was undertaken by a 14 -member medical team from selected health centres in the Greater Accra and the Central regions.

The event formed part of the 54th birthday celebration of the Executive Chairman of the company, Dr James Orleans-Lindsay.

Beneficiaries were screened for malaria, diabetes and high blood pressure. They were also taken through oral health and sight screening and those who were found with minor problems were given instant treatment while those who had complications were referred to other health institutions for further treatment.

The exercise also enabled some beneficiaries to have knowledge of their blood group while lenses were provided free of charge to those who were found to be having problems with their sight.

Commenting on the exercise, Dr Orleans-Lindsay reiterated the need for people to take their health seriously by going for health checks at least once a year.

He said he was aware of the need for everyone to stay healthy and that was the reason why his company renovated the male ward of the Achimota Hospital.

That, according to him, was to enable more people to benefit from health care.

Dr Orleans-Lindsay said his firm had single handedly built a 20-bed emergency block at the Achimota Hospital which would soon be dedicated and handed over to the hospital.

He said plans were far advanced for a fund that would look at the health needs of the nation.

He said over 100 businessmen had been contacted and that each of them would be contributing a certain amount which would be revolving to be used to support the health sector.