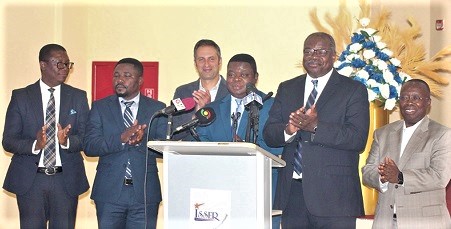 The Institute of Statistical Social and Economic Research (ISSER) of the University of Ghana (UG) has launched a $5 million fund for research.

The funds would be used to support research that would facilitate access to finance among marginalised groups such as women and individuals experiencing extreme poverty in low and middle-income countries through evidence-led findings.

It intends to expand the reach of mobile agent networks through public policy and commercial solutions to help reach the unbanked population.

The project is being supported by the Bill and Melinda Gates Foundation, a non-profit organisation dedicated to fighting poverty, disease and inequity around the world.

Giving an overview of the initiative at the launch in Accra yesterday, the Director of ISSER, Professor Peter Quartey, said the research would play a significant role in assisting policymakers to implement informed decisions of matters of financial inclusion of the marginalised segment of the population.

The director also said the initiative would enable research teams to carry out what he described as “competitively selected research projects on the topic and come up with recommendations to promote access to finance among marginalised groups such as women and people experiencing poverty".

Prof. Quartey said two international conferences would be held on the programme: one at the initial stages of the project and the other towards the end of the first five years.

He said they were also seeking additional funding from other donor agencies to sustain the project in the long term.

While announcing the initiative’s website as refind.isser.ug.edu.gh, the director said selected research activities were expected to come from local and international institutions in low and middle-income countries.

He said funds would be allocated for proposal development and pilot projects, among other activities.

A former Vice-Chancellor of the UG, Prof. Ernest Aryeetey, expressed gratitude to the foundation for supporting ISSER to ensure financial inclusion of the marginalised.

He said the advent of digitalisation had impacted positively on development in the financial sector, especially improved financial services to lower income households and businesses.

The Head of Research of the Bank of Ghana, Philip Abradu Otoo, who spoke through a virtual medium, expressed the bank’s commitment to support the initiative, saying it was in line with the government's digitalisation drive.

A Senior Programmes Officer for Research at the Bill and Melinda Gates Foundation, Dr Seth Garz, said by 2030, about 80 per cent of adults in the world were expected to use and access any form of financial services.

Dr Garz said it was the vision of the foundation to have 60 per cent of households who made less than $2 a day to enjoy financial services by 2030.