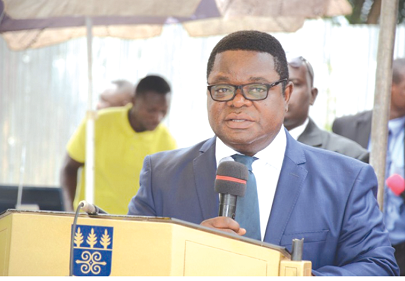 The Institute for Statistical, Social and Economic Research (ISSER) has called on the government to develop a strategy to reduce the debt stock to sustainable levels.

The research institute of the University of Ghana said with debts hitting GH¢296.1 billion, equivalent to 76.1 per cent of gross domestic product (GDP) in December last year, the stock was unsustainable and measures to slowdown  growth must be prioritised.

The Director of ISSER, Professor Peter Quartey, said at the institute’s post-budget review forum last Tuesday that the situation required a serious commitment and effort to help mitigate the repercussions on the economy.

The ISSER post-budget review is an annual event to assess the budget, critique the policies and programmes proposed and offer alternatives to the government.

He said beyond putting the country in a cyclical borrowing situation, the high debt level was consuming almost half of revenue and grants, leaving insufficient funds to pay wages, fund statutory allocations and support new projects.

“We have a higher debt-to-GDP ratio and it has been worsened by the COVID-19. We need strategies to bring it down to sustainable levels.

“We are at a point where debt service as a ratio of GDP is at 49.5 per cent, close to 50 per cent. That is unsustainable and we have to find ways to get around it,” Prof. Quartey, who is a Professor of Economics, said.

The ISSER director said an analysis of the budget showed that three expenditure items – interest payments, transfers to statutory funds and wages and salaries-dash accounted for more than 101 per cent of the projected total revenue and grants for the year.

That, he said, showed that there was limited fiscal space for the government to manoeuvre, hence the need to ensure that the country arrested the debt growth to help lower the interest payment budget.

In addition to the need to bring down the debt, Prof. Quartey said workers must be moderate in their demands for higher pay.

He said any increments in wages must reflect changes in marginal productivity “else it will be inflationary and counterproductive.”

The former Head of the Economics Department of the University of Ghana said the team at ISSER had, therefore, concluded that workers “must be moderate with wage increases in the medium term.”

“We should not, as Ghanaians, be quick to jump on the streets asking for higher wages. Our demands and negotiations should be based on cost of living differentials and improvements in productivity. These should be the reasons to justify any increases,” he added.

Turning his attention to revenue, the ISSER director expressed the hope that the Ghana Revenue Authority (GRA) would step up efforts to increase revenue mobilisation to help fund pressing expenditure.

Prof. Quartey also called for a holistic review of the tax exemptions regime in the country to save funds for national development.