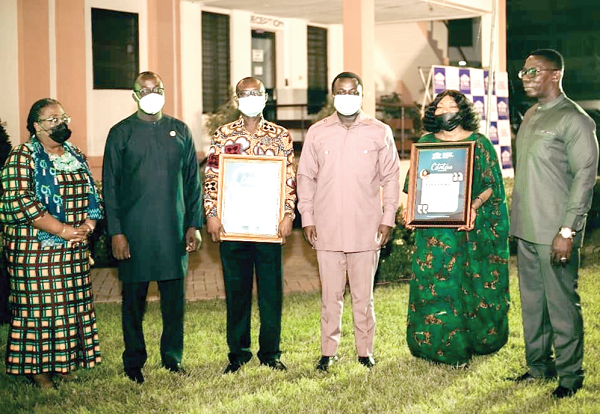 The Chartered Insurance Institute of Ghana (CIIG) has begun the process to attain chartership to enable the institute to issue professional certification and also regulate activities of its members.

The new status, according to a Deputy Minister of Education, Rev. John Ntim Fordjour, would promote the development of the insurance profession and practices to ensure integrity and high standards, in line with internationally accepted best practices.

Rev. Fordjour made this known at a cocktail in honour of two persons for their tremendous contribution to the insurance profession.

They are the immediate past Commissioner of Insurance, Mrs Lydia Lariba Bawa, and a former Chief Executive Officer of Hollard Insurance, Mr Kwame-Gazo Agbenyadzie.

The event was to celebrate the two for their contribution that had helped to shape the insurance industry in the country.

Innovations by the two led to the cancellation of purchasing insurance on credit, better known as ‘No Premium, No Cover’, and the development of claims guideline regimes.

Rev. Fordjour, who is the New Patriotic Party (NPP) Member of Parliament (MP) for Assin South, explained that when the process was completed, it would give legal backing to the institute to award its own professional certificates.

The minister commended the awardees for their role in growing the industry and urged them to always be available to share their experiences, adding: “You must not allow the worth of experience gained over the years go waste.”

The President of the CIIG, Mr Tawiah Ben-Ahmed, said the process to attain chartership began years ago with the Ministry of Finance, but it had since been taken over by the Ministry of Education (MoE), adding: “After our engagement with the MoE, we are encouraged that our aims and objectives are being met.”

He said as part of the process, the Executive Committee of the CIIG would meet on July 13, 2021 to review the draft bill to pave the way for it to be laid in Parliament for subsequent passage into law.

“With the attainment of this objective, we will consolidate our core values of professionalism, integrity and excellence,” the president added.

Mr Ben-Ahmed commended the Minister of Education and his deputies for the collaborative effort at making the dreams of the CIIG become a reality.

The CIIG was formally inaugurated by the late former Head of State, Col I.K. Acheampong, in 1972. It was officially incorporated as a company limited by guarantee under the Companies Code 1963, Act 179.

The Insurance Institute of Ghana became the CIIG in 2017, under the leadership of its President, Rev. Asante Marfo-Ahenkora, who was the Managing Director of Tri-Star Insurance.

It aims, among others, to offer advice on academic standards, qualifications and skill development of members of the insurance industry and form a body of expert opinion on law and the practice of insurance.