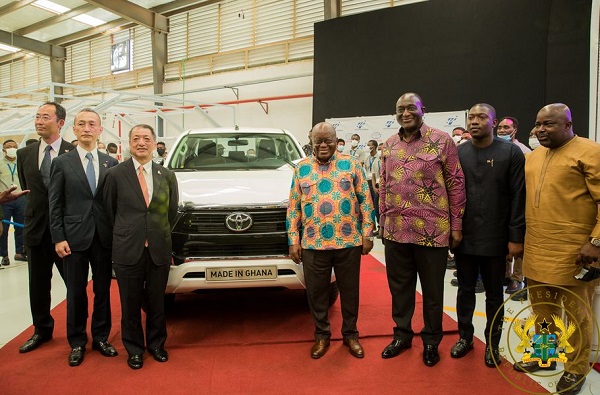 President Akufo-Addo (4th right), Mr Alan Kyerematen (3rd right), the Minister of Trade and Industry, Mr Tsutomu Himeno (3rd left), Japanese Ambassador, and a delegation from Toyota standing by one of the vehicles.

The vehicle assembling drive, anchored on the new Automotive Development Policy, has already guided the establishment of plants by global automobile companies such as Sinotruk of China and Volkswagen (VW) of Germany, and now Toyota Tsusho from Japan, which will assemble Toyota Hilux and Suzuki vehicles in the country.

President Akufo-Addo, at the commissioning yesterday, also unveiled the first Toyota Hilux pick-up truck which was assembled at the plant by young Ghanaian engineers, with the supervision of Japanese engineers.

He was handed a symbolic key to the first car.

The President was excited because Ghana had joined the enviable league of nations that assemble Toyota and Suzuki vehicles.

The decision to establish the plant was announced in Yokohama in August 2019, on the sidelines of the 2019 Tokyo International Conference on African Development (TICAD), which President Akufo-Addo attended.

The President said by assembling and ultimately producing cars in Ghana, new and highly skilled jobs would be created, while the use of foreign exchange to import secondhand vehicles would be reduced.

At the same time, the export of made-in-Ghana vehicles to other African markets would earn the nation the much-needed foreign exchange, he said.

President Akufo-Addo said the government would continue to create the enabling environment to boost the profitability of the emerging automotive sector in the country.

The President explained that the confidence global organisations such as Toyota had expressed in the Ghanaian economy would provide additional impetus for the realisation of the post-COVID-19 economic recovery programme, titled the GH¢100 billion Ghana CARES Obaatanpa programme, which had been designed to revitalise and transform Ghana’s economy.

President Akufo-Addo also reiterated the fact that as part of the automotive programme, the government was collaborating with participating financial institutions to develop an asset-based vehicle financing scheme to enable public sector workers to purchase locally assembled vehicles.

The scheme, he explained, would make the acquisition of new vehicles more affordable.

He said in addition to the fiscal and non-fiscal incentives offered to investors in the sector, the government was promoting the patronage of locally assembled vehicles and had directed all state institutions to that effect.

That, he explained, would demonstrate the government's commitment to supporting made-in-Ghana vehicles, saying a number of senior government officials in his administration were already driving locally assembled vehicles.

“I myself will take delivery of one for my personal use this week. This is an expression of our confidence in what we produce here in Ghana,” he added.

The Minister of Trade and Industry, Mr Alan Kyerematen, said although gold and cocoa had helped the economy over a century, there could be no economic transformation without diversification, hence the establishment of the automobile assembling industry, hinged on the Ghana Automotive Development Policy which had started yielding results.

The minister said the policy would support not only foreign assembly plants but also offer a hand of support to the local and indigenous companies, such as Kantanka.

The Japanese Ambassador to Ghana, Mr Tsutomu Himeno, expressed pride in the feat because the investment would amplify the commitment of the Japanese company, Toyota Tsusho, to quality, especially the quality of management and inspections, which would be applied to the operations in Ghana.

He also made reference to the commitment to skills development and empowering the people of Ghana.

Mr Himeno expressed confidence that the project would succeed because President Akufo-Addo and his government had welcomed the investment, adding that the global business community had its eyes on the success of the project.