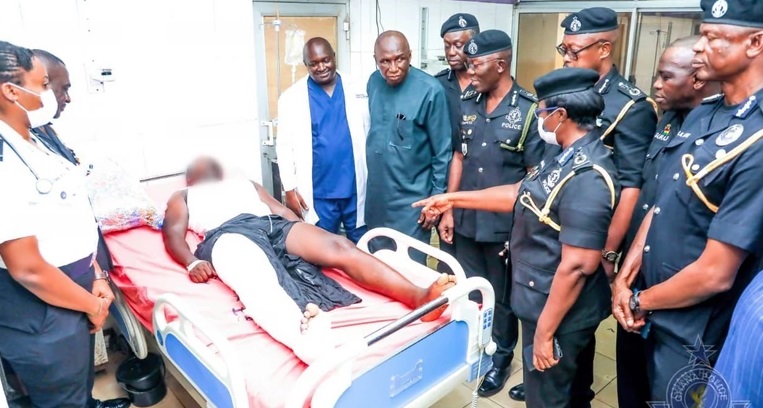 The Inspector General of Police (IGP), Dr George Akuffo Dampare, has promoted the policeman who was hit during a shoot-out between the police and some suspected robbers over the shooting of a woman at Caprice, in Accra.

The policeman who was not named, according to a police statement signed by the Director, Public Affairs of the Ghana Police Service, Chief Superintendent of Police, Grace Ansah-Akrofi, had been promoted from the rank of Corporal to Sergeant with immediate effect.

The officer, together with his team members, took part in a special operation to arrest the armed robbers who attacked, shot and robbed a woman at Caprice in Accra on December 9, 2022.

In the course of the special operation, the police officer was shot by the suspected robbers and suffered multi-fragmented fractures to the bone of his right thigh due to the gunshot and is billed for a major surgery.

The police statement said the Police Administration had made the necessary provision under the Police Emergency Medical Intervention Fund (PEMIF), which was launched in January this year to ensure the injured policeman received the best medical care available in Ghana or other part of the world as the case may be.

Dr Dampare, the Minister for the Interior and other members of the Police Management Board earlier visited the injured policeman in a medical centre where he was receiving medical attention.

The Police Administration commended the officer and all the other members of the team for the role they played, leading to the arrest of one of the robbers and the death of two others.

On December 9, 2022 the Ghana Police Service hinted it was pursuing a gang of armed robbers who attacked and shot a woman at Caprice in Accra.

Eyewitnesses claimed the robbers who were armed shot the woman while she was driving in a Prado with registration number GN 8188-22.

According to the eyewitnesses, the robbers took away the victim’s bag which was suspected to contain some unknown amount of money.

The police said a special intelligence and operations teams had been deployed to trace and arrest the suspects involved.

On December 12, 2022, the police announced that two suspects had been shot dead, with one person arrested in connection with the incident.

According to the police, a sustained police intelligence operation took the fight to the robbery gang at their hideout but the name of the location was withheld.

The police said the robbers engaged them in a shoot-out and in the process a police officer sustained gunshot injury to his thigh.

Two suspected robbers were shot dead and one suspect was arrested.