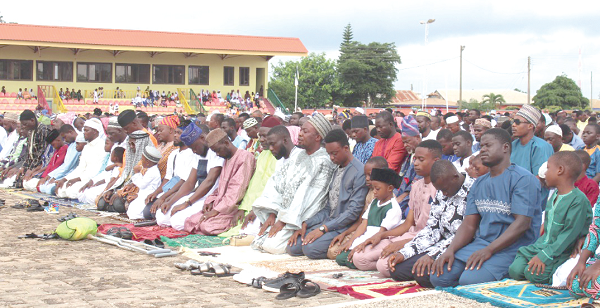 Hundreds of Muslim faithful thronged parks and mosques across the country last Saturday to pray in commemoration of this year's Eid-Ul Adha celebration.

Neatly dressed, mostly in caftans and long attire, commonly known as ‘jarabia’, the celebrants started assembling at the various locations at about 7 a.m. to offer prayers and receive exhortations from Imams, Muslim clerics and some dignitaries.

At the district and regional capitals, the prayers were held in open spaces, especially parks, in order to accommodate the crowds that showed up at the "festival of sacrifice", the biggest celebration for the Muslim.

It is the first open-air Eid-ul-Adha prayers since the COVID-19 pandemic struck in March 2020.

The celebration marks the end of the Hajj or the Islamic pilgrimage to Mecca, which is one of the five pillars of Islam.

There was also the slaughtering of a ram to symbolise the sacrifice.

The various clerics and guests of honour took turns to appeal to the striking teachers and those considering joining them to call off their strike, while the government held talks with them to find an amicable solution.

The Regional Chief Imam, Sheikh Umar Yussif, who led the prayers, thanked Allah for protecting and blessing them.

Also, he prayed for the nation in the wake of the current economic crisis with the hope that the country would come out of it.

Speaking at the event, the Upper East Regional Minister, Stephen Yakubu, also urged Ghanaians to be security conscious, especially in the region, as they had been confronted with terrorist threats from neighbouring Sahel countries.

Mr Yakubu announced a cash donation of GH¢50,000 by the Vice-President, Dr Mahamudu Bawumia, to the Muslim community in the region towards the celebration.

Haruna Yussif Wunpini writes from the regional capital, Koforidua, that the Muslim prayers were offered at the Central Mosque, where the Regional Chief Imam, Alhaji Yussif Amudani Sulemana, who led the prayers, reminded Muslims that Eid-ul Adha was a festival of sacrifice in honour of the Prophet Ibrahim who obeyed Allah's command to sacrifice his son, Ismail.

In view of that, Alhaji Sulemana appealed to the striking teachers that failure to return to the classroom would negatively affect students in the final year who would be writing their terminal examination soon.

The government, he indicated, must also consider the demands of the teachers.

Mr Acheampong said the current economic challenges which had engulfed the world, including Ghana, was not a period for strikes but rather hard work and prayers to Allah to guide Ghanaians through.

He said going to the International Monetary Fund (IMF), therefore, did not indicate that all was not well but Ghana would definitely sail through the difficulties.

From the Ashanti Regional capital, Kumasi, Emmanuel Baah writes that a large number of Muslims converged on the forecourt of the Asawasi Central Mosque for the Eid-ul-Adha prayers.

The Regional Minister, Simon Osei Mensah, and the Municipal Chief Executive of Asokore-Mampong, Kennedy Kankam, were among other public officials who graced the celebration.

The Ashanti Regional Chief Imam, Sheikh Abdul Mumin Haroun, who led the prayers, advised Muslims to be law-abiding as that was the only way the country could develop.

“Let’s always do what is right. Let’s contribute our quota to building this nation,” he told the gathering.

Sheikh Haroun added that it was the responsibility of every good citizen to help build the prosperous Ghana that we all envisaged.

The Sumankwahene, Baffour Asare Kogyawoasu, extended Otumfuo’s felicitations to the Muslim community, and urged them not to only give, but to give with clean hearts in order for Allah to accept their prayers in good faith.

From the harbour city, Tema, in the Greater Accra Region, Benjamin Xornam Glover reports that the Metropolitan Chief Imam of Tema, Adam Abubakar, led the prayers at the Tema Sports Stadium in Community One.

He advised Muslims to use the occasion to live in peace and unity with their neighbours while helping to build the nation.

Addressing the worshipers, the MCE for Tema, Yohane Amarh Ashitey, said the assembly was grateful to the Muslim community for being supportive of its development programmes.

The MCE urged them to be steadfast in their faith and pursue the virtues of the religion such as peace, righteousness, love and harmonious living.

From Cape Coast, Francisca Eshun reports that Muslims converged on various grounds to thank Allah for blessing and guiding them throughout the month.

They said prayers for families, communities and the nation.

The Zonal Missionary of the Ahmadiyya Muslim Mission, Maulvi Abdul Hameed Sawiri, who led the prayers at the Cape Coast Stadium, said the festival must motivate Muslims to train up obedient children such as Abraham's son and for fathers to do the will of God like Abraham, saying peaceful families would create peaceful communities and nations.

She urged the Muslims to pray for the nation as the government made efforts to improve the socio-economic environment for all.

From Ho, Alberto Mario Noretti reports that members of the Muslim community slaughtered a ram by a stream at the Nfojoe Park.

The sacrifice by the stream was preceded by prayer sessions led by the Volta Regional Chief Imam, Alhaji Muniru Ali.

He called on the citizenry to respect the authority of the state and traditional rulers always, just as Ibrahim did when Allah asked him