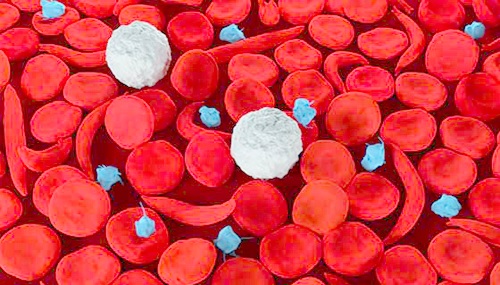 Sickle cell disease or sickle cell anaemia is a group of inherited blood diseases in which the red blood cells which carry oxygen can become abnormally shaped, stiff and sticky and that lead to problems.
30.5k Shares

Thanks to a process known as pre-implantation genetic testing, a couple with sickle cell traits on Thursday, February 4, 2021 at 4.29 p.m. welcomed a baby boy at the Lister Hospital and Fertility Centre in Accra, who they were sure had not inherited the sickle cell genes from both of them.

Weighing 3.5kg, he is said to be the first baby born in the country to a sickle cell carrier couple using the process.

The process ensures that the couple does not have a child who is SS (inherit two sickle cell genes ‘S’, one from each parent, which is usually the most severe form of the disease) or the burden of contemplating if the pregnancy should be terminated.

It was a dream come true for both the young couple and the Founder and CEO of the hospital, Dr Edem Hiadzi.

Process
In an interview with The Mirror, Dr Hiadzi explained that currently, assisted reproduction had reached the level where the embryos could be checked for the genetic composition before being put back in the mother’s womb and that was what he employed for the feat.

Therefore, for a couple who both had Sickle Cell Trait (SCT), one could analyse each embryo to check whether it had sickle cell disease, a carrier status or simply a non-carrier status which then allowed the selection of the unaffected embryo for implantation.

Dr Hiadzi said for this particular case, there were 10 embryos - four were affected as SS and just one was AA (normal genes), while the rest were AS (one sickle cell gene and one normal gene).

“So we put back AA and AS embryos. The woman ended up with one baby. This means that one implanted but the other didn’t. So we know there is no SS. After a few months when we do the sickling test for the baby, that is when we will know if the baby is an AA or AS. But this baby should grow just like any other baby without the ill health associated with sickle cell disease,” he explained.

The other good thing Dr Hiadzi said was that because there were more embryos, they were frozen for the couple and they would not have to go through the whole In-Vitro Fertilisation (IVF) process and pre-implantation diagnosis when they decided to have more children.

For this young couple (both in their 30s and who want to remain anonymous), it was a stressful moment when they found out they both had the SCT.

That meant there was a possibility of passing on the trait to their children.

They had met, fallen in love and decided to get married but realised that they both carried the SCT.

The main contention for them was the knowledge that they had at least a 25 per cent chance that their children would be affected.

While some couples have had the ‘courage’ to break up because they did not want their children to ‘suffer’, others have taken the plunge to face the consequences.

Family concerns of the potential impact of SCT on their children and their family led to a break in their relationship.

The couple, however, finally got back together and got married in October 2018.

They decided to use science and technology to their advantage.

Blessing from God
“We feel great with our decision to go through the pre-implantation genetic testing. We are excited to have this blessing from God,” the couple said.

According to the couple, they knew their families had a valid point when they (families) advised them not to get married because of the possibility of having children who would have sickle cell disease.

So after breaking up and coming back together, they knew they could not be reckless and had to decide on how to have ‘healthy’ children when they got married.

“There are people who didn’t know their status and got married but we knew and could do something about it,” the man said.

Through research, they came across the pre-implantation genetic testing and were convinced that it was possible.

They first contacted a fertility clinic in Kumasi but when they moved to Accra for work, the Lister Hospital was recommended to them.

Not a smooth journey
The journey has not been without challenges though.

For instance, the woman said she struggled with what she called ‘moral dilemma’ and wondered whether their plan was in line with the word of God.

“I wondered if we were trying to play God. I even prayed for my blood type to change,” the woman confessed.

But she said she came to the realisation that God gave humankind the knowledge and wisdom to practise science, so when she took on that frame of mind, it was easier to pursue the process.

Throughout their journey too, what they found interesting was that society only advocated that a sickle cell carrier couple should not marry and no one talked about the medical options available to help such couples have children who would not inherit the SCT.

The other challenge is the cost of going through the process which is expensive.

“We probably understand why people advise that you find another partner because it might be hard for the average Ghanaian to afford the cost involved,” they said.

Despite these challenges, the couple maintains that “the joy and peace of mind far outweigh the cost of going through the process”.

Foundation to the rescue
Dr Hiadzi admitted that it was an expensive procedure, higher than the normal IVF which was out of reach to many Ghanaians.

He said the fertility society had been canvassing and working to get the government to help with the means of cutting down the cost.

“Sadly, almost all the inputs into IVF are imported and you pay tax on every import, so by the time you go through that, basically there is very little for workmanship,” Dr Hiadzi said.

He said the hospital was considering setting up a foundation which could help raise money to bring down the cost of the pre-implantation genetic diagnosis to the barest minimum for the many people out there who would like to use the technology to help prevent the birth of children who would suffer so much for a greater part of their lifetime.

He was hopeful that the embryology team at the hospital would complete its training and would not need external support with the process of the biopsy to roll out more people faster.

There are four main types of sickle cell anaemia which are caused by different mutations in the genes.

In Ghana, it is estimated that about 14,000 children are born with sickle cell disease every year.