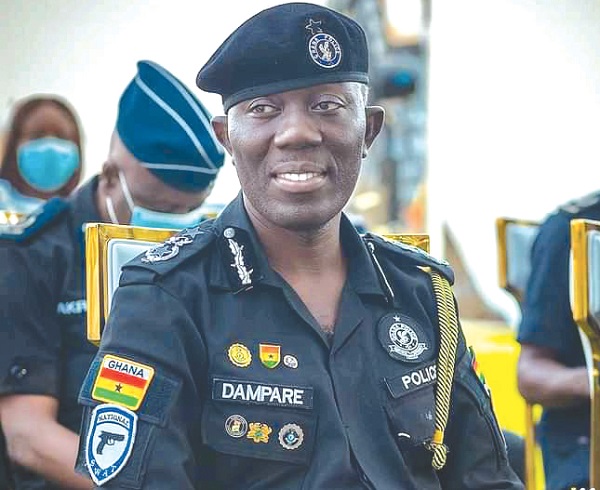 The Inspector General of Police (IGP), Dr George Akuffo Dampare, has stated that the police are collaborating with regional and continental security agencies to improve security in the country, especially as it hosts the secretariat of the African Continental Free Trade Area (AfCFTA).

The move is in line with an African Union Peace and Security Council Insight report that indicated that in spite of the potential of AfCFTA to contribute to economic development, peace and security on the continent, its implementation could be hampered by insecurity.

In his presentation at the 74th Annual New Year School and Conference at the University of Ghana, Dr Dampare said there had been deliberate efforts to ensure security for the successful implementation of the free trade area.

The IGP, whose presentation was done on his behalf by the Director of the National Patrol Directorate of the Ghana Police Service, Commissioner of Police (COP) Paul Manly Awuni, said the leadership of the Ghana Police Service had formulated plans after establishing what was required of the service as a law enforcement institution in the AfCFTA host country and was reviewing its operational strategies.

The 2023 Annual New Year School and Conference, which opened last Tuesday, is on the theme: “Positioning the African market for sustainable economic development through African Continental Free Trade Area (AfCFTA)”.

The four-day event, under the auspices of the School of Continuing and Distance Education, College of Education of the university, in collaboration with the National AfCFTA Coordination Office, is aimed at exploring how to strengthen trade, industry and commerce, leveraging the AfCFTA agreement.

Speaking on the sub-theme, "Governance, peace and security preparedness for African Continental Free Trade Area (AfCFTA)," Dr Dampare said during the review of the service’s operational strategy and reflection on public perception, it was found that "most of the public were dissatisfied with the services we delivered".

To address the issue, he said, the service had formulated and implemented nine-action point initiatives including enforcing the law without fear or favour, community engagement, leveraging technology to fight crime, police personnel fighting crime with commitment and dedication, dealing with indiscipline and carnage on the road, and serving with respect for the public.

He said others included a community crime combat and ensuring the fear of crime initiative that had led to increase police visibility in communities.

"This, we believe, will facilitate intra-regional and continental ability of persons, capital, goods and services," he said.

"If crime, particularly violent crime, is high, it would have a negative effect on the implementation of the AfCFTA," he stressed.

The IGP further said the police had, therefore, placed intelligence at the core of their operations and also taken police services to the doorstep of the public.

In line with this, he said the police had established informants’ control centres to manage their informants, decentralise the various police units by establishing 144 well-resourced bases across the country and instituting a complaints feedback system that provided feedback on cases under investigations to the person's involved.

Additionally, the service had instituted strict measures such as police action against rider indiscipline, passenger spokesperson and motorists’ engagement initiatives to curb indiscipline and carnage on roads that would impede intra-regional and continental mobility of persons, capital, goods and services.

He called for support from the public and other civil society organisations to win the fight against crime.

The Executive Director of a not-for-profit policy research and advocacy organisation, Institute of Democratic Governance (IDEG), Dr Emmanuel Akwetey, said peace and security were key to the effective implementation of AfCFTA.

He expressed concern about the threat in the region, especially with terrorism, extremism and radical jihadists within the sub-region, and called for urgent action to address the situations.

He, however, said it was significant to note that despite the worrying situation, Ghana had witnessed stability for the past 30 years, and had thus been described as the beacon of democracy in Africa.

Dr Akwetey said even though the country had enjoyed peace over the years, it was imperative to address pockets of electoral violence during, before and after general elections.

The African Continental Free Trade Area (AfCFTA), headquartered in Accra, Ghana, is a flagship programme of the African Union under its Agenda 2063.