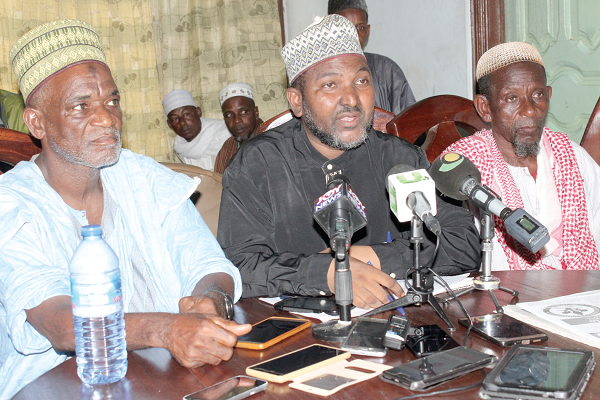 The Ghana National Association of Cattle Farmers (GNACAF) has appealed to the Minister of Defence to direct personnel of the ‘Operation Cowleg’ to turn their attention to activities of herdsmen instead of killing cattle.

They alleged that the “killing of innocent cattle” was not a solution because the cattle were being controlled by the herdsmen.

At a press conference in Accra, the National Chairman of GNACAF, Imam Hanafi Sonde, also suggested that personnel involved in the exercise could apprehend the cattle and subsequently prosecute the herdsmen or its owners for trespassing.

“In a situation where cattle owners refuse to come forward, the cattle can become state property,” he added.

Referring to an alleged directive that the security personnel should shoot at the cattle as a way to force the herdsmen at Agogo in Ashanti to move out of the area, Alhaji Sonde said: “We are not satisfied with the shoot-and-kill approach by the security on the cattle, within and outside Agogo.

“We think it would have been better to apprehend the cattle owners to face the law,” he added.

The chairman also stated that: “We are very sad to find out that the killing of the cattle has even extended to other areas like Kumawu in the Ashanti Region and some communities in the Eastern Region.

“Because if the issue of Agogo is by a court order, then why extend your activities outside the Agogo jurisdiction? We think it is not right,” he noted.

Alhaji Sonde proposed the establishment of grazing reserves and fodder banks across the country to address the protracted conflict between cattle herdsmen and farmers, “because we think that we cannot continue to be losing  lives in this nation”.

He explained that such designated reserves would give clear-cut areas where the herdsmen could take their cattle to graze without any confrontations.

According to Alhaji Sonde, such a move was the only holistic solution to resolving the conflict between the cattle farmers and crop farmers, which he noted had become a threat to human and food security in the country.

On behalf of a Ghana Cattle Ranching Committee, Alhaji Sonde expressed appreciation to the Ministry of Food and Agriculture and the National Security for their instrumental roles in the formation of the committee, and expressed the belief that the findings of the committee would be implemented to ensure peaceful co-existence.

Giving a background, Alhaji Sonde explained that the herdsmen at Agogo had been directed to move out of the area by a court ruling, or be forced out if they refused to obey the court order.

He said even though the association did not support those herdsmen who defied the court order to move out of the area, he was not sure that the court’s directive indicated that the cattle should be shot at, “because we know that the cattle are innocent”.

Alhaji Sonde emphasised that the association condemned in no uncertain terms the attacks on the security personnel at Agogo and supported ongoing investigations to fish out the culprits to face the full rigours of the law.