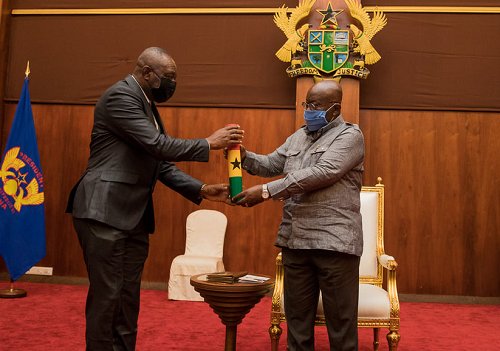 President Nana Addo Dankwa Akufo-Addo has expressed concern about the persistent fraudulent sale and registration of lands as well as encroachment on public lands in the country.

He wondered how it became possible for the same parcel of land to be registered in the name of different people, why documents submitted to the Lands Commission got missing mysteriously and why it took years to register just one plot of land when the commission was in charge of all the processes.

“We will lose all our investors if they spend good money to acquire land as a major tool for production, only to realise that what they acquired is litigation that spans years and decades,” the President lamented and charged the Lands Commission to institute reforms that would bring trust in the system and help the country achieve its economic development objectives.

President Akufo-Addo gave the charge at the Jubilee House in Accra last Wednesday, when he swore in the 25-member National Lands Commission, chaired by Mr Alex Nii Quaynor, who is also the Greater Accra Regional Chairman of the Lands Commission.

Membership of the commission includes a representative each from the Ministry of Lands and Natural Resources, the Environmental Protection Agency, the Ghana Institution of Surveyors, the National House of Chiefs and the Ghana Bar Association.

The rest are representatives from each of the 16 regions.

President Akufo-Addo expressed regret that in spite of the various interventions, most of the challenges in land administration persisted, including the fraudulent sale and registration of lands, poor record keeping at the commission and encroachment on public lands.

The commission, he said, should not continue with business as usual but must pursue institutional reforms to cover “personnel, processes and the working culture”.

On what he referred to as disturbing, the President raised the issue of conflicting judicial decisions on the same parcels of land and cited the example of Re: Adjancote Acquisition; Klu vs Agyemang II [1982-83] GLR 852, delivered on December 15, 1982, through to Agyei Osae and Others vs Adjeifio and others [2007-2008] SCGLR 499, delivered on May 7, 2008.

He noted that the same parcel of land had been held to belong to the Shiashie Stool, the Klanaa Quarter Stool, Odaitei Tse We, Nuumo Nmashie Family and the Osae Family.

“This, obviously, will create problem for the registration of lands. I am, however, encouraged to learn that the new Lands Minister is engaging the Chief Justice on this matter and you must give him all your support to ensure that we find a lasting solution to this problem,” President Akufo-Addo stressed.

The President indicated that the Land Act, 2020 (Act 1,036) offered a foundation to achieve the reforms because it had far-reaching provisions to build an effective land administration the country desired.

He mentioned some key areas to include the establishment of Customary Land secretariats to see to the management of stool, skin, family and clan lands, and restrictions on large-scale disposal of family and clan lands without the concurrence of the Regional Lands Commission.

Others are the power of the commission to survey and demarcate land, the provision for electronic conveyancing, the detailed provisions for the compulsory acquisition of land, including the payment of compensation, and the management and use of public lands.

“It is your duty to ensure that the public understands this law and abides by it,” he said.

President Akufo-Addo urged the commission to pursue the digitisation of the records of the commission assiduously because most of the reforms to build an efficient land administration would be attained with digital registration.

He reminded members of the commission that state lands they would be managing were vested in the President for the people of Ghana, and that as managers on behalf of the state, they must ensure judicious use of such lands for the good people of Ghana.

He explained that Act 1,036 prohibited the granting of any interest in public land, other than usufruct rights, to any public institution, and that no public institution should deal in, grant or allocate any land without the express approval of the Minister for Lands and Natural Resources, acting on the instructions of the President.

“The days when public lands were literally dissipated, without regard for the public interest, are over,” he noted.

He said the commission was aware of the interest of the public in its work, manifested in the criticism by the media of its performance, as well as the interest shown by the President and his Vice, all to ensure that the commission offered efficient services.