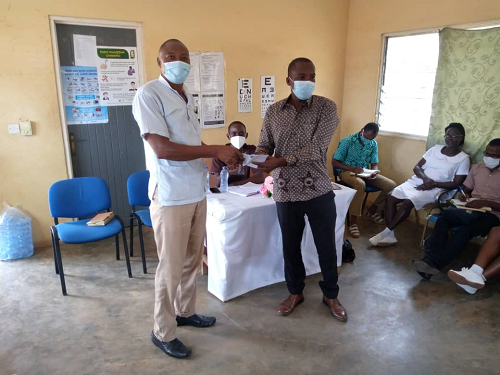 The Ghana Registered Nurses and Midwives Association (GRNMA) has extended financial support totaling GH¢25, 000 to four of its members in the Northern and Savannah Region to access health care and reconstruct their destroyed homes.

The beneficiaries are Mr Valentine Abdulai Bayowo, diagnosed with end stage kidney failure who received GH¢10, 000 towards his routine dialysis while Mr Yakubu Sualisu of the Tamale West Hospital, Messrs Isaac Bawa and Joseph N. Datuah, both of the Bole Community Health Nurses Training College (CHNTC) in the Savannah region all receiving GH¢5, 000 each to enable them rebuild their houses that were raised down by fire on September 27 and 28, 2020 respectively.

A group picture of some regional executives of the GRNMA after the presentation ceremony. In the picture on 2nd right is Mr Dassah, the Northern Regional Secretary who handed over the monies to the beneficiaries.

The Northern Regional Secretary of the GRNMA, Mr George Dassah, who handed over the cash donations to the beneficiary members of the association, said it followed requests for support by the members through their district executives.

He noted that the gesture signifies the association's continuous commitment to ensure that the welfare of their members remained paramount.

He called for support from other benevolent organisations to come to their aid, especially Mr Bayowo who currently needed about $35,000 to undergo kidney transplant.