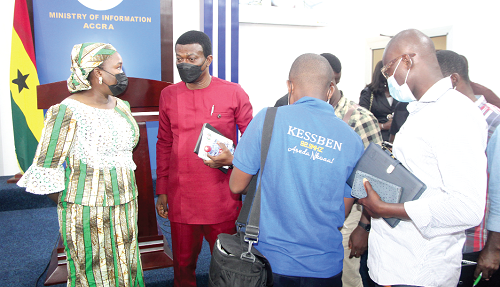 Ms Fatimatu Abubakar (left), a Deputy Minister of Information, and Mr Mark Awuah  Baah (2nd from left), Director of System Operations of GRIDCo, during an interaction with journalists after the briefing. Picture: ESTHER ADJEI

The Ghana Grid Company Limited (GRIDCo) says it is collaborating with the National Security to eject squatters and traders who ply their activities under the company’s transmission lines.

The Director of System Operations of GRIDCo, Mr Mark Awuah Baah, said the issue of people conducting activities under transmission lines was one of the serious challenges confronting his outfit.

Accordingly, he said, GRIDCO would do everything to tackle the menace to safeguard lives and prevent a disaster.

“This borders on the security of our staff and so we are working with the National Security to make sure that this problem is nipped in the bud. This has to be resolved,” he said.

Mr Baah made this known when GRIDC0 took its turn at the Ministry of Information’s Meet-the-Press series in Accra yesterday.

He warned people to desist from using areas where transmission lines passed as basis for any sort of activity.

According to him, the transmission lines carried high voltages of electricity and it was for such reasons that no human activities were allowed around such sites.

“Thank God that so far all the incidents of falling lines happen in the bush. If a line is to fall where people are, no one will be made out; all bodies will be charred. Do not stay under the transmission lines,” he warned.

GRIDCo is the entity that transmits power from generating companies, such as the Volta River Authority (VRA) and independent power producers, to distributors such as the Electricity Company of Ghana (ECG).

Mr Baah explained that GRIDCO had made significant investments in its systems to ensure adequate and reliable supply of electricity.

For instance, he mentioned the construction of a $200-million 330KV transmission line from Aboadze in the Western Region to Bolgatanga and then to Burkina Faso, with substations in Prestea, Kumasi, Kintampo, Tamale and Bolgatanga.

The project, he said, was completed in September this year and had put a stop to the intermittent power cuts to Kumasi and its environs and also increased the capacity of Ghana to export electricity to Burkina Faso.

“Between April and July, Kumasi had a big challenge because we were working on the line, but now we have completed it and power supply to Kumasi and the north has now stabilised,” he said.

Mr Baah said the Pokuase BSP was the biggest in the country and had allowed the ECG to reduce its congestion to meet the growing demand by power consumers in the northern part of Accra.

The Pokuase BSP, he said, had also allowed the ECG some flexibility, to the extent that it could be used to supply power to all parts of Accra while repair works were being conducted on other BSPs, such as the one at Mallam.

Mr Baah explained that in spite of the numerous investments, GRIDCO would not rest on its laurels but continue to invest in and improve on its systems to meet the growing demand for power.