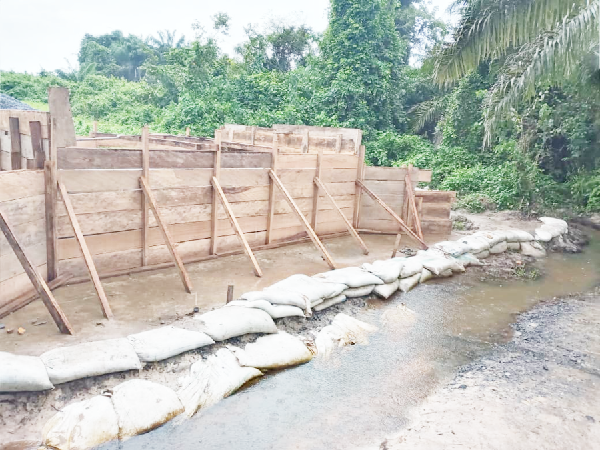 The United Nations Capital Development Fund (UNCDF), through its quest to enhance Green Employment and Enterprise Opportunities in Ghana (GrEEn) project, is constructing a climate resilient-proof culvert bridge at Yabiw in the Ahanta West Municipality of the Western Region.

The project, estimated at £2.6million, which started in September this year, would be completed this month to ensure the community members get easy access to and from other adjoining communities.

Speaking during the tour of some project sites in the Western Region, the Technical Specialist for Local Government Finance, Ms Angela Yayra Kwashie, said with the recent climate challenges across the globe, climate resilient infrastructures should be employed to support the rural communities for sustainable economic development.

She said immediate construction of the climate resilient culvert bridge would not only help the community to have easy access but also prevent floods during heavy rains.

GrEEn, she said, was being implemented under the European Union Emergency Trust Fund (EUTF) for Africa, with a funding of €20 million from the EU and co-funding from SNV and UNCDF.

Under it, she said, was a combination of grants, technical assistance and convening power, while it worked with the Ministry of Local Government and Rural Development and other relevant ministries as well as metropolitan, municipal and district assemblies (MMDAs).

Ms Kwashie also said the GrEEn project had four result areas under which UNCDF working with the assemblies in the regions focused on short-term job opportunities for the youth, women and returnees created through green and climate resilient investments.

She stated that the fourth area supported and sped the growth of micro, small and medium-scale Enterprises (MSMEs) in the green and circular economy so they could offer decent, fair and sustainable jobs to the youth, women and returning migrants.

The key results of the project are to have the 10 MMDAs transitioned to green and climate resilient local economies and the creation of 1,500 decent and sustainable jobs created by MSMEs for youth, women and returning migrants.

The Country Lead and Project Management Specialist for UNCDF, Mr Enea Stocco, said UNCDF was showcasing the benefits that the project was making in the local communities with the implementation of the Cash-for-Work activity.

A member and beneficiary from the community, Mr Stephen Kwesi Amissah, commended the GrEEn project, saying UNCDF and its partners had implemented the infrastructure needed by the community.