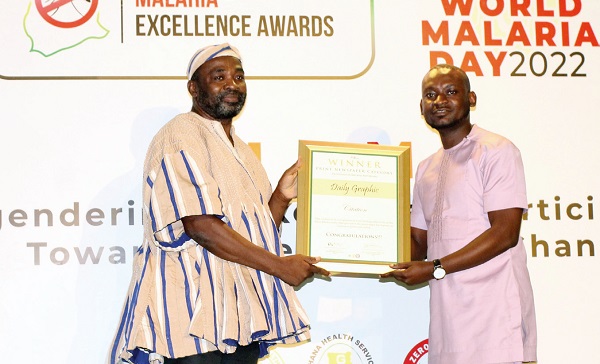 The Graphic Communications Group Limited (GCGL) was honoured at the maiden edition of the Malaria Excellence Awards held last Friday in Accra.

The company’s flagship newspaper, the Daily Graphic, received the Media Institution of Excellence in Malaria Reporting Award (Print Category) for the distinguished role it has played as the media entity that provides the most space for reports on malaria in print and online.

Two members of staff of the paper also received separate awards for their exceptional reportage on malaria issues and their commitment and contributions to malaria awareness creation.

The awards event was organised by the Ministry of Health, Ghana Health Service and the National Malaria Control Programme (NMCP) to recognise the role partners played towards the fight against malaria in the country.

It was on the theme: “Engendering Stakeholders Participation towards a Zero Malaria Ghana”, and formed part of the year-long activities to commemorate this year’s World Malaria Day celebration.

The occasion also recognised the efforts of several other journalists as well as pioneers and other health institutions for their contributions to the fight against eradicating malaria in the country.

In a statement read by the Chief Director at the Ministry of Health, Kwabena Boadu Oku-Afari, on behalf of the Minister of Health, Kwaku Agyeman- Manu, he congratulated the winners on their efforts in the fight against malaria in the country.

He further urged them to continue to support the National Malaria Control Programme to carry out its mandate effectively to expand access to all interventions to reach everyone and most importantly, intensify advocacy to raise the required resources necessary to achieve the national malaria target.

He indicated that although the awards did not commensurate with the works they had done over the years, it would serve as a memorial of their efforts.

Mr Agyeman-Manu indicated that the government, private sector, individuals and all stakeholders had a role to play towards malaria elimination in the country.

“Let’s build a national coalition to move this agenda forward, bearing in mind that the fight against malaria is one we can win together,” he stated.

The Director-General of the GHS, Dr Patrick Kuma-Aboagye, stated that in Ghana, malaria remained a significant public health concern.

He said the country accounted for 2.1 per cent and 1.9 per cent of the global malaria cases and deaths, making it one of the top 10 highest malaria burden countries in the world.

While the entire country is at risk of malaria, he said the Volta and the Western regions had the highest malaria burden with 20.4 and 27 per cent malaria parasite prevalence rates in Ghana in under five years respectively.

He said the Western Region was the only region detected in the 2019 Malaria Indicator Survey to have increased malaria parasite prevalence rate in children under five from 23.5 to 27 per cent in 2018.

In spite of the dwindling donor funding and the emergence of the COVID-19 pandemic, he said the country had made significant progress with malaria control.

He said there had been a reduction of in-patient malaria deaths recorded in the various health facilities from 599 in 2017 to 227 in 2022.

According to him, the progress was made possible due to the collaborative effort with stakeholders who had contributed in diverse ways including technical, financial and other support.

The Paramount Chief of Esikado, Nana Kobina Nketsia V, for his part, applauded all the partners and donors whose concerted effort had saved millions of lives since the year 2000.

For a disease such as malaria, he said the country could strive more to further reduce deaths and eventually record zero levels of mortality cases across the country.

Nana Nketsia observed that many countries had successfully eliminated the disease and many more were making greater efforts to move closer to eliminating it.

He cited Algeria, Mauritius and Morocco as countries within the African space that had eliminated the disease using the same interventions as Ghana.

Though the dynamics are different across this country, he indicated that the overriding key was determination and commitment.

“These examples indicate to us that elimination is an achievable goal.

They are great lessons we need to learn in these countries and apply in our country’s setting to maximise our efforts towards this goal,” Nana Nketsia stated.