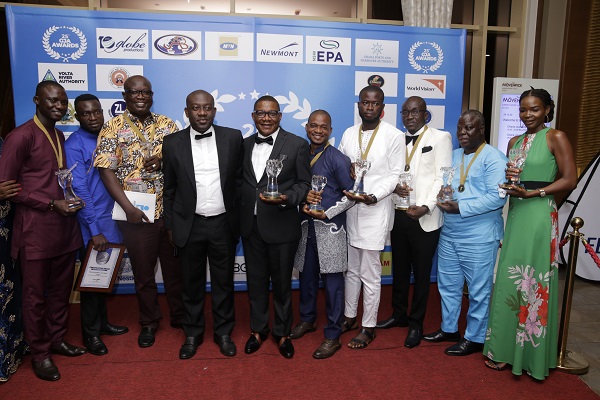 The Graphic Communications Group Limited (GCGL) has once again exhibited its dominance in the media space by picking 11 awards at the 25th Ghana Journalists Association (GJA) Awards.

The Editor of the Daily Graphic, Mr Kobby Asmah, picked a special award, the Outstanding Editor Award, while Mr Emmanuel Quaye, was given a special award in photojournalism and camera work.

The company’s flagship newspaper, the Daily Graphic, also won the Newspaper of the Year.

The ceremony, held last Saturday, was on the theme; “COVID-19 and credible presidential and parliamentary elections: The media factor”.

It attracted several individuals operating within the media space, as well as some members of the Diplomatic Corps, ministers of state, government officials, among others.

Journalist of the Year

The occasion, which was all pomp and ceremony, was thrilled by a comedian and live band performances by the Ghana Police Band.

The host of News Files on Joy FM, Mr Samson Lardi Anyenini, was adjudged the Journalist of the Year 2019, while he also won the Best Reporter on Democracy and Peace-Building.

A Ghanaian Times Reporter, Ms Raissa Sambo, who was adjudged the Komla Dumor Most Promising Journalist of the Year, also bagged the Best Reporter in Child Protection and Participation, Print.

Effort of the media

The Chief Justice, Mr Justice Kwasi Anin Yeboah, in a speech read on his behalf by a Supreme Court judge, Justice Amadu Tanko, noted that the media had been a strong advocate in ensuring the development of Ghana’s democracy.

He said the country’s independence struggle might have taken a different turn had there not been journalists to highlight and fuel the agenda of self-rule.

In that sense, he said, the nation owed much to media men and women who risked their lives to ensure that Ghana became a self-governing nation.

He indicated that the Judiciary also used the media to let the public know about its operations to enable them to appreciate judicial processes.

As a result, he said, the Judiciary was committed to ensuring media freedom and would continue to work with the media to grow Ghana’s democracy and improve the lives of the people.

He said in any ordinary year, the media had a significant role to play in society, stating that in an election year, however, that role became more onerous.

The Chief Justice, therefore, called for enhanced media ethics in this election season; adding; "Let's not indulge in sensationalism. Let's distance ourselves from misreporting and let's sanitise our pages and airwaves."

For his part, the GJA President, Mr Roland Affail Monney, whose tenure would soon end, commended the winners for holding aloft the banner of quality journalism and oiling the wheels of democracy.

“Indeed, media consumers, media watchers and media critics are proud of you, our professional gems. It may sound outlandish but not frivolous. The future of this profession lies in the mouths and hands of journalists of objective streak, not necessarily those with a partisan bent,” he said.

Mr Monney indicated that the area which stridently, begged for the injection of the highest degree of professionalism, was the country’s general election.

According to him, every election induced its own tension, but what was unacceptable was the reckless inclination of certain media practitioners to fan the flames of tension and stoke the embers of violence, which characterised the voter registration exercise in parts of the country.

“Any action by the media, which may imperil the peace or endanger our democracy will go beyond the pale of pardon,” Mr Monney said.

To ensure the safety of journalists in this year’s elections, he announced that the association had secured free personal accident cover from SIC Life for all its members who would cover the elections.

He indicated that the insurance package would cover their phones and cameras, and that a memorandum of understanding (MoU) to that effect would be signed tomorrow.

“The insurance cushion should not in any way lure journalists to lower their guard. As a journalist, your duty is to fetch the news and not be the news. You ought to be alive before you can cover the news, so sharpen your sense of security in order not to fall easy prey to violent kingpins and hoodlums who attack journalists without any hindrance,” he cautioned.

Mr Monney was also presented with a surprise award from his able national and regional executives for transforming the association under his six-year tenure as President of the GJA.