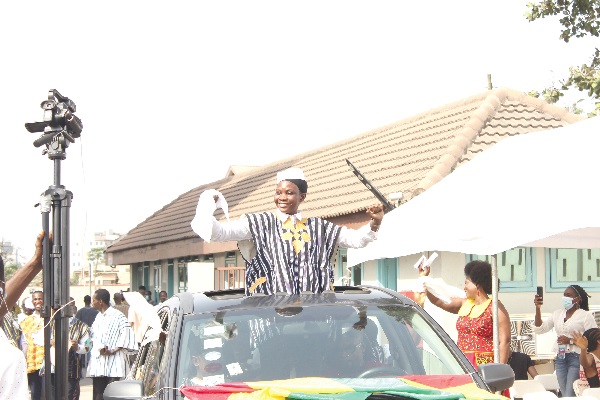 Rose Edudzi Kpormatsi of the Finance and Audit Unit of the company, mimicks Kwame Nkrumah on her arrival to declare the Independence of Ghana in the mock session Follow @Graphicgh

The Graphic Communications Group Limited (GCGL) went back in time to celebrate Ghana’s independence from British colonial rule with a re-enactment of Ghana’s Independence celebration in Accra yesterday.

Staff of the company — dressed mostly in Ghanaian traditional attire, including smocks, slits and kaba with scarves to match, native hats, and other vintage clothing — took turns to hoist the Ghana flag in the mock contest.

At the end, an all-female group featuring Kwame Nkrumah and fellow members of the famous Big Six made an appealing replay of Ghana’s Independence declaration to claim the ultimate honour.

Edmund Smith-Asante of the News Department mimicking Osagyefo Dr Kwame Nkrumah at the declaration of Ghana's Independence. Those cheering him on include Kobby Asmah (2nd from right), Editor of the Daily Graphic.

The group, representing the Finance and Audit Department of the company, received rave reviews from a panel of judges who found their performance close to the events at the iconic Polo Grounds in Accra on March 5, 1957, ahead of the next day’s official declaration of Independence.

There were no British at the Graphic Head Office to relinquish the reins of power to a team of determined Ghanaians, but the declaration by the team leader that: “The independence of Ghana is meaningless unless it is linked to the total liberation of the African continent,” resonated with the buoyant crowd of junior and senior rank staff, sending the entire space into raptures of applause.

Appearance, originality, creativity and the use of time were some of the essential criteria the judges rewarded during the mock competition.

The Finance and Audit Department won with 90 per cent, beating the Technical and Human Resource departments to second and third places with 78 and 60 per cent respectively.

Marketing, G-PAK and News followed with 56, 40 and 31 per cent respectively.

Ghana’s independence was declared by Osagyefo Dr Kwame Nkrumah on the eve of the country’s political independence.

He, together with his colleagues, Kojo Botsio, Komla Agbeli Gbedemah, Archie Casely Hayford and Krobo Edusei, all clad in their northern smocks and hats, stood at the old Polo Grounds in Accra to declare Ghana’s freedom from British colonial rule.

The occasion — the first in a series of activities planned by the company across the month of March — was characterised by a display of Ghanaian culture, as staff sang and danced to colonial songs, reminiscing the eve of Independence when then Prime Minister, Dr Kwame Nkrumah, declared the country’s upcoming independence.

The mock declaration formed part of activities by the GCGL to mark the country’s 65th Independence anniversary celebration, which will be hosted in Cape Coast for the first time, and will be observed in other parts of the country tomorrow.

“Freedom” and “Free forever” were predictably some of the common vocabularies on stage during the departmental performances.

It featured various heads of departments, with the Marketing department setting the pace.

The occasion also featured music performances from students of the Additrom Preparatory School at Adabraka and staff of the GCGL.

The Director of Marketing, Mr Franklin Sowa, who spoke on behalf of the Managing Director, Mr Ato Afful, explained that the occasion was to create a family bonding among workers of the company, irrespective of their individual backgrounds.

He said the enactment of the various aspects of the independence celebration depicted the country’s rich culture and uniqueness.