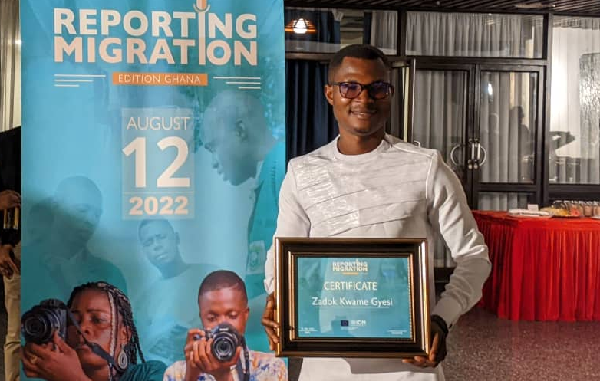 A Senior Reporter with Graphic Online, the online news portal of the Graphic Communications Group Limited (GCGL), Zadok Kwame Gyesi, has won an award for his reports on migration by the International Organisation for Migration (IOM).

Mr Gyesi took the third place in the Print and Online category of the award, which was held on Friday evening, August 12, 2022 in Accra by the IOM.

The competition, which was announced early this year, celebrates journalists who bring attention to the many facets of migration in West and Central Africa in both French and English language.

In all, six Ghanaian journalists in Print, Online, Radio and Television were awarded for their various reports on migration.

Each of the winners received a citation and a cash prize, with the first place winners, receiving plaques in addition.

The Reporting Migration competition was organised by the IOM in partnership with the European Union.

Fred Duhoe of Citi News received the first prize in the Radio and Television category and was followed by Justice Baidoo of Joy News and Prince Appiah, a journalist with the Multimedia.

In the Print and Online category, Jamila Akweley Okertchiri a reporter with Daily Guide and Jonathan Donkor of Ghanaian Times took the first and second places respectively. 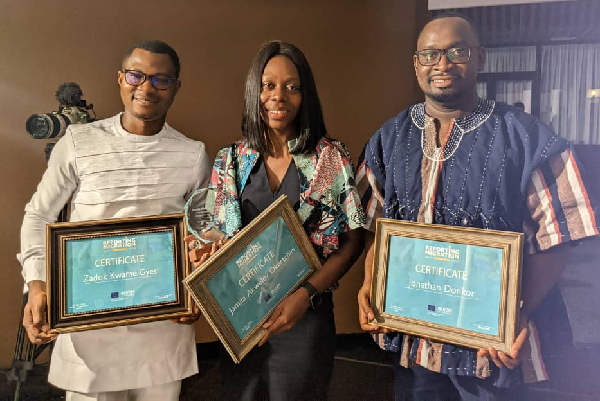 The Project Manager for the Ghana office of the IOM, Ms. Pooja Bhalla, in a brief remarks, expressed concern over the low reportage on migration issues in the country.

She said “attention afforded to migration issues by most media networks and journalists is small when compared with that which is given to other segments.”

For her, migration reporting contribute immensely to awareness raising activities, informing returning migrants, communities of origin and the public about the dangers and alternatives to irregular migration.

Ms Bhalla noted with concern that the few reports on migration also tend to dwell mostly on the negative aspects, saying “When migration is highlighted, it tends to be framed in a negative manner in which migration is linked to perceived security threats, health dangers, economic problems among others.”

She said the media had been a key partner to many of the IMO’s interventions, hence the initiative to celebrate journalists for their various roles in helping to promote migration issues in their media houses.

“The media has become a powerful tool of communication and its importance in the promotion of migration cannot be underestimated. Media coverage impacts the range and quality of information received by the public,” she said.

Ms Bhalla said IOM and its partners would continue to build the capacities of journalists to enable them report accurately on migration issues, pointing out that in 2018, with funding from the European Union Emergency Trust Fund for Africa (EUTF), 58 journalists in migrant prone regions in Ghana, including the Western, Bono East and Bono regions, were trained on Awareness raising and reporting on irregular migration.

The training, she explained, was part of the larger awareness-raising strategy of the EU-IOM Joint Initiative for Migrant Protection and Reintegration Assistance, developed to inform potential migrants, communities of origin and the public about the dangers of and the alternatives to irregular migration.

“It is our intention to continue to mentor and build the capacity of journalist to harness their expertise to raise awareness on the dangers of irregular migration, provide accurate information and to sensitize communities and fight the stigmatisation that often accompanies irregular migrants,” Ms Bhalla noted.

She said since 2017, IOM with the support of its partners had been able to help 3885 Ghanaians, comprising 2814 males and 247 females migrants to return voluntarily in safety and in dignity with respect to their rights.