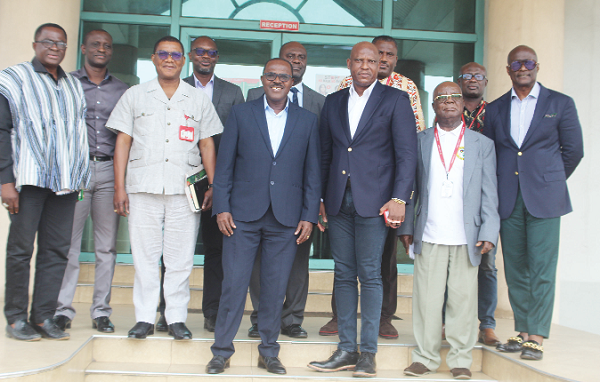 Ato Afful (3rd from right), MD, GCGL, with Dr Kwaku Ofosu-Asare (3rd from left), Executive Chairman of the LOC for the 13th African Games, Accra 2023; Kobby Asmah (2nd from left), Editor, Graphic; Ben Nunoo-Mensah (left), a member of the LOC, and some management staff of the GCGL and the LOC after the meeting
30.5k Shares

The management of the Graphic Communications Group Limited (GCGL) has committed itself to partnering the Local Organising Committee (LOC) of the 2023 African Games to organise a first-class event that will project Accra as the sporting capital of Africa.

The two bodies also pledged to initiate strategic programmes that would create some buzz around the multi-sport event, comprising 54 African countries, to attract a global audience, as well as leave a lasting legacy that would be cherished by present and future generations.

The Managing Director of the GCGL, Ato Afful, gave the assurance when a five-member delegation from the LOC, led by its Executive Chairman, Dr Kwaku Ofosu-Asare, paid a courtesy call on the management of the GCGL in Accra yesterday as part of the LOC’s stakeholder engagement to seek a mutually beneficial partnership in its quest to organise the best ever African Games in Accra from August 4 to 19, 2023.

Mr Afful said his outfit was blessed with solid global brands and human resource capable of supporting the LOC in its quest to carry Ghanaians along during preparations towards the games, as well as use the event as a vehicle to bring Africans together to share common values through sports.

Touching on the challenges confronting Ghana sports and how they could be addressed, he said sports development needed perseverance to realise fruitful results.

“Sports development needs perseverance, so notwithstanding the challenges confronting it, we need to develop disciplines in which we have comparative advantage, so that we can use them to develop the others.

“Funding sports is also quite challenging, but with proper mechanisms and strategic planning, we can address the challenges confronting sports for it to generate keen interest among corporate bodies and attract sponsorship,” he said.

Mr Afful also challenged the LOC to consciously and deliberately identify long lost legends in specific disciplines and use them as brand ambassadors to market the games to make them successful.

“Emotions build brands, hence the need to bring many of our legends on board to make the games more visible to the sports fraternity,” he stressed.

For his part, Mr Asmah noted that the task confronting the LOC in organising a continental sporting event was enormous but not insurmountable.

He was of the view that in addressing the challenges, it was important to initiate programmes that would carry the entire populace along.

“Hosting such a continental sports event in Ghana is very challenging, but with hard work and planning, we can win many medals during games,” he said.

He, therefore, challenged the LOC to join hands with GCGL to create much awareness among Ghanaians of the games to enhance their success.

Mr Essel and Mr Sowa promised to support the LOC in diverse ways to make the event a success.

For his part, Dr Ofosu-Asare revealed that initially the African Games were to be hosted in Accra, Kumasi and Cape Coast, but the LOC was later advised to centre everything in Accra and create a Games Village for the athletes.

He called for support from the management of the GCGL to partner the LOC to create awareness of the games to make them successful.

He noted that facilities to be used for the games, including a swimming pool at Borteyman, were at various stages of completion.

He gave an assurance that the contractors were working around the clock to ensure that the projects were completed ahead of the games.

He said the LOC was also collaborating with the various sports federations to help prepare Ghanaian athletes to ensure that Ghana won more medals than they did in previous games.

“We need to win more medals, but we have to be realistic. With Egypt, South Africa, Morocco and Nigeria also participating in the African Games, we cannot say we will host and win. But we can win many medals and place at least fifth at the end of the games,” he said.

The games will be hosted by Ghana for the first time since the maiden event in Congo Brazzaville in 1965, with about 5,000 to 7,000 athletes and officials gathering in Accra to participate in 24 disciplines.

It is expected to reach an estimated 5.5 billion viewers across the globe via electronic and digital platforms as a prelude to the 2024 Olympics Games in Paris.