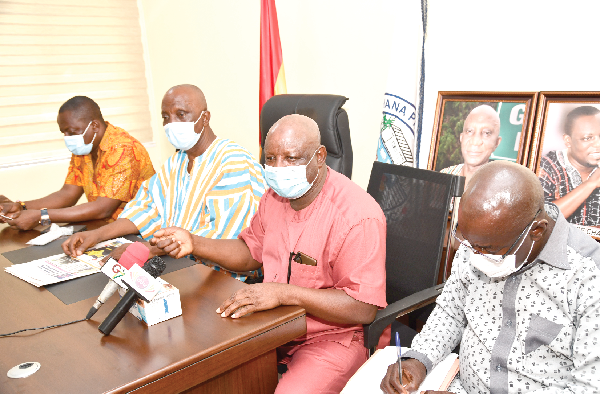 The Ghana Private Road Transport Union (GPRTU) has served notice that it will take strong punitive action against its member organisations at the various lorry parks across the country who fail to impress on their drivers to observe and enforce the COVID-19 preventive protocols.

The union said it had, among other preventive practices to help curb the spread of the pandemic, directed all drivers under its umbrella and their conductors to wear face masks at all times and enforce same for passengers.

Among other sanctions, in accordance with the GPRTU constitution, the union has cautioned that drivers who flout the directive risk “losing their right to load” for more than a month.

Addressing journalists at a press conference in Accra last Tuesday, the General Secretary of the GPRTU, Mr Godfred Abulbire Adogma, said the union would dispatch its national task force within the week to monitor and enforce compliance.

He said the move had become necessary in the wake of the surge in the country’s COVID-19 active case count and the directive by President Nana Addo Dankwa Akufo-Addo, in his 22nd address to update the nation on the disease, for commercial transport operators to enforce the COVID-19 preventive protocols in their operations

Data from the Ghana Health Service as of 4 p.m. last Tuesday showed that Ghana’s active COVID-19 cases stood at 1,924.

“There is a general disregard for the safety protocols on the disease by the public, including drivers, their conductors and commuters. The national secretariat of the GPRTU is concerned about this, and in response to the President’s directives, we have set out to enforce the regulation at all lorry terminals in our operational jurisdiction,” Mr Adogma said.

As part of efforts to keep the virus at bay, he outlined new measures the GPRTU was instituting at various bus terminals across the country.

He said aside from the compulsory wearing of face masks, station masters and porters were to provide enough Veronica buckets at all loading points and terminals for hand-washing.

In addition, all drivers and station masters must openly display “no face mask, no entry” signs at the entrance to all bus terminals as a means of creating awareness and aiding compliance.

“All levels of the union shall provide passengers with hand sanitiser before and during their journeys,” Mr Adogma said.

Moreover, he said, “we will dispatch the National Task Force to monitor and enforce compliance and we will ensure that it is sustained until such time when the virus would have been brought under control”.

He appealed to the security agencies and the media to support the union to effectively enforce the health and hygiene rules and urged the public to report drivers who did not comply with the rules for action to be taken against them.

Mr Adogma expressed concern about the conduct of some ‘floating’ drivers who, he noted, persistently failed to comply with the safety protocols.

He said ‘floating’ drivers were not members of the GPRTU, for which reason it was difficult for the union to compel them to comply with the measures outlined.