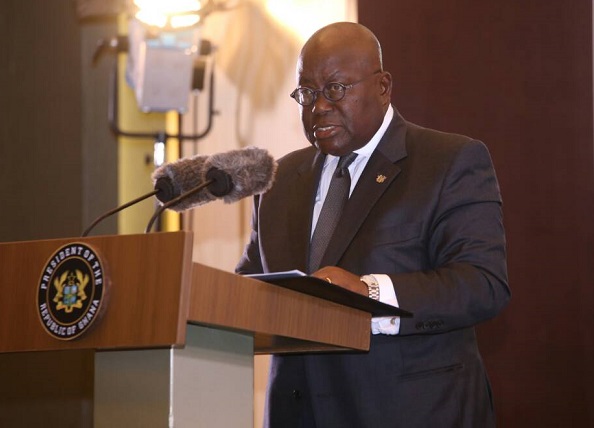 President Nana Addo Dankwa Akufo-Addo has said the government will soon issue a $2.5-billion bond to retire the debt in the energy sector and create space for increased investment in the sector.

He said the government had to move quickly to address energy supply constraints by tackling the financial challenges in the sector and define a policy framework that would encourage private sector investment.

“We will very soon issue a $2.5-billion energy sector bond to retire the legacy debt in the energy sector and create space for increased investment in the sector.

“We have encouraged majority of Ghanaian private sector participation in the Electricity Company of Ghana (ECG), the main distributor of power in Ghana, under the Millennium Challenge Compact (MCC) with the United States government.

“The government has reviewed existing power purchase agreements (PPAs). Our policy is to move Ghana from a reliance on thermal towards renewable energy. We have, thus, decided that new PPAs will only be signed for renewable energy,” the President said.

Addressing the opening session of a two-day 2017 World Bank Development Finance Forum in Accra yesterday, President Nana Akufo-Addo said the government was implementing a policy of re-profiling existing debts to extend their maturities, reduce the interest burden and create space for the private sector.

The forum is the third in a series of such engagements and the first in Africa. The first two were held in Europe — Rotterdam, The Netherlands, in 2015 and Dublin, Ireland, in 2016.

About six weeks ago, Ghana issued, for the first time, a 15-year local-currency bond, raising in that cycle more than US$2 billion.

That, bond, the President said, was evidence of the returning private investor confidence in Ghana, adding that because investors made decisions on the basis of their perception of risk and uncertainty, that transaction sent a clear message to the markets that the new government, under his leadership, had started on a sound footing and that Ghana was on a path of fiscal consolidation, debt sustainability and growth.

President Nana Akufo-Addo said the government, which had been in office for barely five months, inherited a very difficult economic situation.

“I should add, however, that one would not have thought so, going by the reports of the IMF which were largely at variance with the reality experienced by Ghanaians. As a result of the situation we inherited, we have set for ourselves a long-term agenda for a ‘Ghana Beyond Aid’, requiring far-reaching reforms,” he added.

Those reforms at the level of economic governance, he said, involved fiscal responsibility and discipline, addressing corruption and unresponsive bureaucracies at the political governance level, with focus on the productive sectors, addressing agriculture and industry, and, at the business environment level, addressing bottlenecks and formalising the economy.

Ghana is open for business

The President described Ghana as a land of opportunity for private capital and that, “more importantly, Ghana is open for business”.

He said the country had taken it upon itself to build a business-friendly economy that would enable it to get to the stage where the opportunities available in Ghana would help it build an optimistic, self-confident and prosperous economy.

He projected that Ghana’s infrastructure finance gap was estimated to run between $3.9 and $5.5 billion per year through to 2026, adding that it meant that more than $40 billion would be required to bridge the gap.

“What is true is that we cannot meet this demand without financing at a much larger scale through significant additional private involvement. That is true for Ghana and true for the entire West African region and beyond,” he said.

“We have put in place measures to reduce the fiscal deficit bequeathed to us from nine per cent in 2016 to 6.5 per cent this year. The government has created fiscal space by capping earmarked funds to 25 per cent of government revenue and realigning expenditures to government priorities,” he added.

President Nana Akufo-Addo said the attempt to ensure fiscal discipline was a policy that successive governments had tried over years to implement but had been unable to do.

To boost growth, he said, the government had re-oriented fiscal policy from a focus on taxation to a focus on production.

Additionally, the President said, the government had granted capital gains tax exemption on stocks traded on the Ghana Stock Exchange or publicly held securities approved by the Securities and Exchange Commission.

Furthermore, he said, effective September 1, this year, the clearance of goods from Ghana’s ports would be 100 per cent paperless and all internal customs barriers in the country would be removed to facilitate the movement of goods.

“As part of the process of formalising the economy, we will implement a digital property addressing system for Ghana this year and also issue biometric national identification cards to residents this year, so that every resident will have a unique identification number,” he said.

The President reported that the government had decided, as a matter of policy, to seek more private sector equity financing for infrastructure projects, instead of the historic resort to borrowing and more borrowing that had resulted in the ballooning of the national debt stock.

That, he explained, was a policy underpinned by his government’s commitment to the private sector and the desire to maintain debt sustainability.

President Akufo-Addo said the actions of the government were only a part of the equation and that there was the need for risk reallocation instruments from multilateral developments banks, such as guarantees and insurance, to be deployed to trigger additional investments.

“These are the kinds of deals that should happen more often in Africa, as development finance institutions partner private capital,” he added.