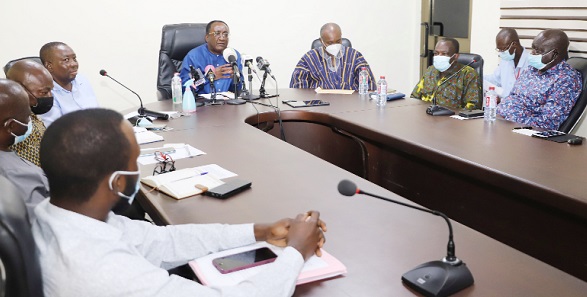 The government has released GH¢20.1 million to the Ministry of Food and Agriculture (MoFA) to pay compensation to farmers whose birds were affected by the Avian Influenza (bird flu).

It is the first tranche of an approved GH¢44 million to support farmers whose birds were affected by the disease as of the end of December last year.

Within the period, 554,638 birds affected by the flu were culled, with 2,548 crates of eggs and 1,701 bags of feed also destroyed for being contaminated.

Subsequently, farmers were expected to present their Veterinary Services Directorate (VSD) certificates of destruction to the Finance Unit of the MoFA to be paid.

At a press briefing in Accra on Wednesday, March 9, 2022, the sector Minister, Dr Owusu Afriyie Akoto, disclosed that the latest release meant that GH¢30 would be paid in respect of a matured bird, GH¢10 per chick, GH¢80 per a bag of feed and GH¢10 for a young hen (pullet), while every crate of egg destroyed would receive GH¢10.

Dr Akoto further explained that the ministry had set up a database to effectively capture all farmers affected from 2016 to date to facilitate payment of compensation.

The approval also included the procurement of vehicles, motorbikes and laboratory equipment for the smooth operations of the VSD.

He said a biometric registration and certification of all poultry farms were currently ongoing in the country and entreated farmers to lend themselves to the processes to be captured in the comprehensive database of poultry farmers.

He emphasised that farms that did not receive certification would not be paid any compensation in the event of an outbreak in the future.

The acting Director of the VSD, Dr Patrick Abakeh, said since February 2, this year the country had been recording “sporadic outbreaks of bird flu", adding, however, that the spread of disease was subsiding with the measures that had been put in place so far to check its prevalence.

He reminded farmers that the ban on transporting day-old chicks without due authorisation and certification was still in force, and that “we will soon start closing down farms after the necessary legislations have been put in place”.

The Chairman of the Ghana National Association of Poultry Farmers, Victor Oppong Adjei, expressed gratitude to the government for the package and the introduction of a database to capture affected farmers.

He appealed to members of the association to fulfil their part of the bargain by implementing best farm management practices.