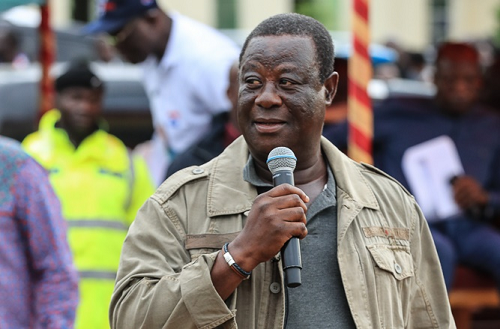 The Minister of Roads and Highways, Mr Kwasi Amoako-Atta, has described the washing away of a portion of the Wa-Hamile highway as a national disaster, stating that the government will take the necessary steps to fix the road in the fastest possible time.

Last Friday’s torrential rains in the northwestern part of the country badly damaged portions of the road that links the country to its neighbour, Burkina Faso.

Portions of the 88.5-kilometre highway have been washed away at Daruri, near Nadowli, and Babli, near Lawra, cutting links with the Nandom Municipality, a border town from Wa, the Upper West Regional capital.

The damage to the road cut off six districts from the capital, thereby truncating food supply and other commercial and statutory activities along the stretch.

Mr Amoako-Atta said he and his team would meet the contractor and other officials for work to start on the road as soon as possible.

The minister made a familiarisation and aerial view tour of the affected areas which is part of the northern section of the Western Corridor road.

He was accompanied by the Regional Minister, Dr Hafiz Bin Salih, officials of the Regional Security Council, the Ghana Highway Authority (GHA), municipal and district chief executives of the affected areas, among others.

The Roads Minister said the President, Nana Addo Dankwa Akufo-Addo, was overwhelmed by the disaster and had tasked him to mobilise all available resources to ensure speedy reconstruction of the roads.

On behalf of the President, the minister also expressed sympathy to the chiefs and people of the region and said the fact that there were no deaths did not make the disaster any less serious.

Mr Amoako-Atta said he had tasked the National Disaster Management Organisation (NADMO), the Agriculture Directorate and others to take stock of the casualties and damages to farmlands and houses in the region and link up with their respective head offices for any assistance to be offered to the affected people.

The torrential rains, which cut off portions of the Wa-Hamile highway, also caused damage to farms and houses.

Drivers plying the route have had to divert to the Wa-Hain road, although a longer detour.