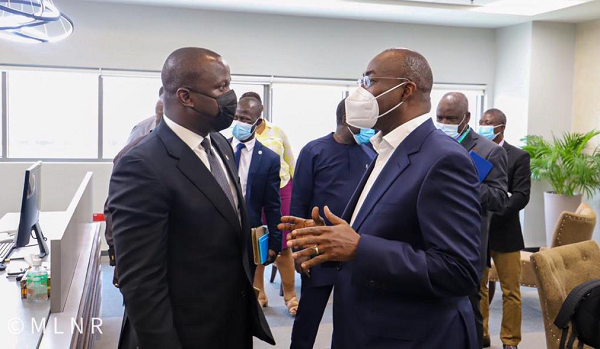 The Minister for Lands and Natural Resources, Samuel A. Jinapor (left) interacting with the CEO of GIADEC, Mr. Michael Ansah during the Minister's visit to GIADEC head office in Accra.
30.5k Shares

The Minister for Lands and Natural Resources, Samuel A. Jinapor on Monday paid a working visit to the Ghana Integrated Aluminium Development Corporation (GIADEC), assuring management and staff of the company of government’s vision and commitment to developing an integrated aluminium industry in Ghana.

He said it was President Akufo-Addo’s vision to develop an integrated aluminium industry in Ghana by establishing an aluminium refinery for the country’s bauxite as well as streamlining the whole value chain.

He pledged to work closely with GIADEC in order to help achieve the government’s industrial transformation agenda. He also taskied the company to set up an Inter-Ministerial Steering Committee, comprising all relevant ministries to ensure that the vision and objectives for an integrated aluminum industry are achieved.

The Minister was accompanied by Mr. Benito Owusu Bio, Member of Parliament for Atwima Nwabiagya North in the Ashanti Region, the Chief Director of the Ministry, Prof. Patrick Agbesinyale and other directors.

For his part, the Chief Executive Officer (CEO) of GIADEC, Mr. Michael Ansah, who welcomed the sector Minister and his team, disclosed that GIADEC is actively working on selecting strategic investors as partners for the development of the bauxite mines, alumina refining and smelting, as well as other downstream industries.

Additionally, he emphasized how GIADEC will execute its operations within the framework of international environmental best practices.

The Deputy CEO of GIADEC, Mr. Akwasi Osei Agyei thanked the Minister and his team for the visit, saying they had had a fruitful meeting.

Industry analysts say a fully integrated aluminium industry in Ghana would boost the country’s economy, create jobs and transform the communities in which GIADEC operates.

GIADEC is a wholly Ghanaian owned entity with a mission to be the leading Integrated Aluminium Company in Africa, creating sustainable value for stakeholders and differentiated by cost effective and safe environmentally sound operations.