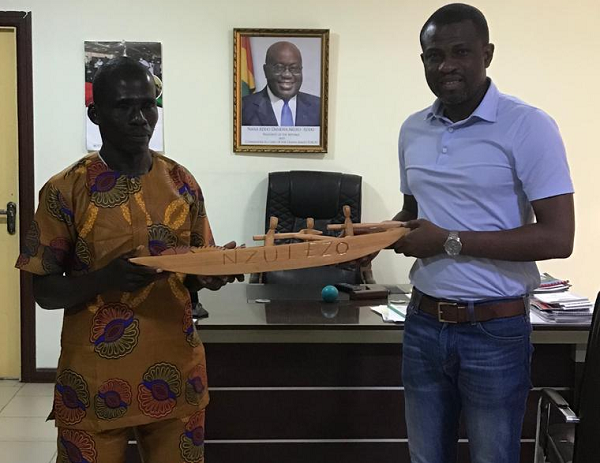 The Deputy Minister of Tourism, Arts and Culture Mr. Mark Okraku- Mantey receiving the gift from Mr. Francis Addy, a native of Nzulezu and his team to address their concerns at his office on Friday, March 18,2022. Follow @Graphicgh

The Deputy Minister of Tourism, Arts and Culture Mr. Mark Okraku-Mantey, has expressed Governments commitment to support the country’s tourist attraction sites to boost tourism especially that of Nzulezu and its environs.

“There is a programme set up by government to lend financial support to such a cause in order to boost the tourism potentials” he opined and assured Mr. Francis Addy, a native of Nzulezu on behalf of government to ensure that Nzulezu is one of the most visited sites.

Mr. Mark Okraku-Mantey gave the assurance when he received Mr. Francis Addy, a native of Nzulezu and his team to address their concerns at his office on Friday, March 18,2022.

According to the Deputy Minister, Nzulezu is one tourist attraction site that contributes to the development of the country, hence governments commitment to improve its tourism potentials to ensure an improved tourists visit and revenue for development.

Mr. Okraku-Mantey admonished Ghanaians especially the youth to build interest in finding their roots and be proud of their origin especially their local Ghanaian names without corrupting or alterations of our beautiful culture.

Mr. Francis Addy a native of Nzulezu and his team threw more light on the Nzulezu situation highlighting more on the broken-down outboard motors used to power their fishing canoes which makes it difficult for them to move and renders them inefficient at work especially in transporting tourists around to enjoy their visits.

As the major medium of transport for indigenes and tourists alike as well as remote visitors, Mr. Addy urged government to treat this concern as urgent since it is depriving communities of Nzulezu and government alike of its National benefits to cash-in on the tourism potentials of Nzulezu.

Mr. Francis Addy also a canoe carver, presented a wooden sculpture in a form of a traditional canoe and a paddle in honour of the Minister and Deputy Minister and took the opportunity to brief the Deputy Minister on the lack of funds limiting the work of artist to engage in more carving works on canoes.

He informed the Deputy Minister about his expertise in constructing power boats and can boast of about 15 -20 horse power boats over the past years and also solicited for government support to access funds to construct more to support his community.

Nzulezu is derived from the Nzema language which means “surface of water” and is pronounced originally as “Nzulezo” a small town built on Lake Tadane located in the Western Region.