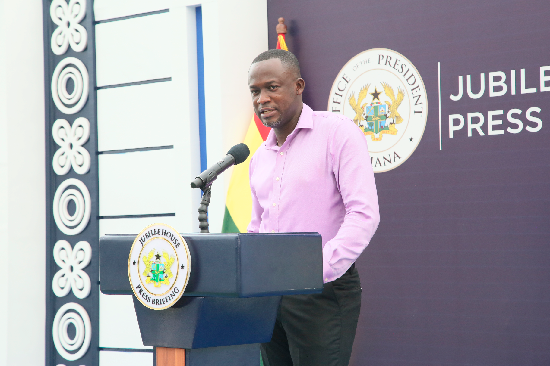 The government has begun the process for the acquisition of a new jet for presidential travels, the Director of Communications at the Presidency, Mr Eugene Fiifi Bentum Arhin, has said.

He said the new aircraft would be bigger than the current one.

Answering questions from journalists during the weekly Presidential Press Corps briefing at the Jubilee House last Monday evening, Mr Arhin said the Minister of Defence, Mr Dominic Nitiwul, who is at the forefront of the acquisition, would announce the details later.

Mr Arhin recalled that during President J.A. Kufuor’s era, the government planned to purchase two aircraft — the current jet (Falcon 900 EX-Easy) and an Embraer — but when President J.E.A. Mills took office, the bigger aircraft, the Embraer, was cancelled.

He said it would have made better economic sense to keep the bigger one because when the President was travelling, the entire delegation could move at a time to help save cost.

Following a recent question in Parliament by the Member of Parliament (MP) for North Tongu, Mr Samuel Okudzeto Ablakwa, as to why President Nana Addo Dankwa Akufo-Addo had not been using the Falcon presidential jet for long travels in recent times but instead relied on hired aircraft, there has been public debate on the state of the presidential jet — whether it is in good condition and considered air-worthy or not.

In June this year, Mr Nitiwul, responding to a question on the jet in Parliament, said the time was ripe for the nation to acquire a new and befitting presidential jet.

He explained that the current Falcon 900 EX-Easy aircraft used by the President was not fit for purpose.

“The capacity of the current Falcon aircraft is far below that of the Fokker 28 which flew very, very important persons of more than 25 passengers during the Acheampong, Akuffo, Rawlings and Kufuor eras, hence the urgent need for an appropriate aircraft which can carry better payload in terms of passengers of 70 to 100 and carry all their baggage without affecting the performance of the aircraft,” he said.

According to Mr Nitiwul, the presidential jet could carry only 11 passengers, minus the crew, and it often had to do “undesirable refuelling stops at unintended destinations” during long hauls, causing inconvenience to both the President and the host countries.

To avert such inconvenience, he said, the use of a chartered private jet was critical, as the plane could carry more passengers and fly long distances without making stops to refuel.

“Yes, while the Falcon Ex-Easy is serviceable and air-worthy, the decision to travel particularly to far and multiple destinations, such as the President travelling to France, Belgium and South Africa and back to Ghana, especially during the COVID-19 era, would always require a larger capacity aircraft such as a Boeing Business Jet (BBJ) or an Airbus ACJ 319, not even when the Falcon is air-worthy,” he said.

“Very, very important persons (VVIPs) or Presidential travel is not about aircraft type or cost; it is all about the safety of the aircraft crew and passengers,” he added

He explained that it was more expensive not to have a BBJ or an Airbus, pointing out how Ghana had to spend over $50m over the last 10 years to airlift soldiers for peacekeeping missions alone.

“If the Air Force had a strategic lift, this amount would have been saved to the treasury,” he said.

He said when the President used the Falcon 900 Ex-Easy jet, most of the presidential staffers, security detail and Presidential Press Corps travelled commercial, with increased cost and its attendant delays.