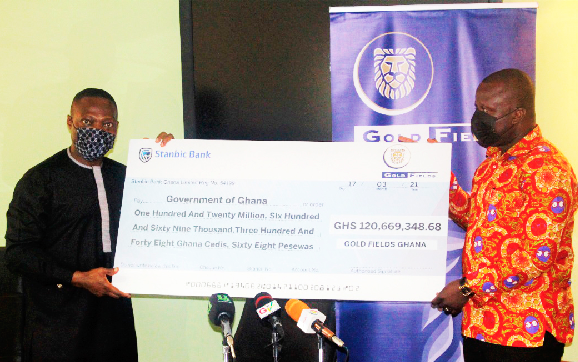 Gold Fields Ghana Limited (GFGL) has presented a cheque for GH₵120 million to the government as dividend for 2020 for holding 10 per cent free carried interest in the company.

The amount represents dividend from the company’s bigger mine in the country — the Tarkwa Mine.

Under the country’s mining laws, the state owns 10 per cent carried interest (shares) in large-scale mining companies in the country.

The Executive Vice-President and Head of Gold Fields West Africa, Mr. Alfred Baku, led a team of the company to present the cheque to the Minister of Lands and Natural Resources, Mr. Samuel Jinapor, in his office in Parliament yesterday.

Handing over the cheque, Mr. Baku said the dividend was besides the corporate tax that the company paid last year.

He said the company should have presented the money to the government in 2020 but had to reschedule the payment to this year due to the outbreak of COVID-19 in Ghana.

Gold Fields is known to have two operations within the Gold Fields West African region — the Tarkwa Mine and the Damang Mine — as well as a joint venture with Asanko Gold.

Mr. Baku said the dividends for the Damang Mine was not “coming in today” because four years ago, the company consulted the government to discuss development agreement to revamp the mine, which was on the verge of collapse at the time.

“We were contemplating our closure planning but we came to discuss with the government that we needed a development agreement that we can fix our fiscal terms and we will be able to reinvest into the operations.

“After the development agreement and half-way through the project, God-willing next year we will be here to present the dividends cheque for the Damang Mine,” he assured.

Receiving the cheque, Mr. Jinapor expressed appreciation to the GFGL for its commitment to paying dividend to the government.

“It is very heartwarming and refreshing to be receiving money on behalf of the government at this very crucial moment in our economic evolution,” he said.

He noted that in the crucial time of post-COVID recovery effort in the country, the government needed the support of all stakeholders and players in the economy to enable the country to recover from the effects of the pandemic.

“It is only through this that the Ghanaian people will be satisfied with the participation of large-scale mining companies in the mining industry of our country, which then suggests that they are also getting the benefit for the resources which belong strictly to the good people of this country,” he stated.

He gave the assurance that he would work with large-scale mining companies as partners to realise the vision of the President to build a sustainable, viable and mutually-beneficial mining industry which had regard for national interest and the environment, as well as the realisation of the economic aspirations of Ghanaians.