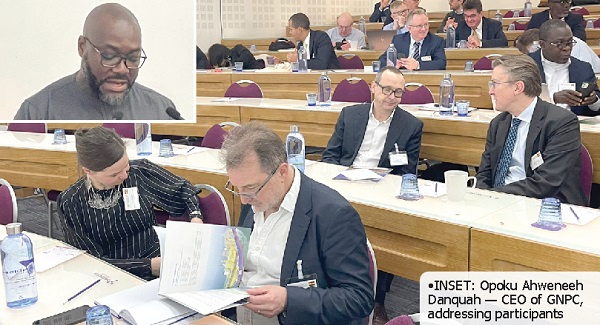 Consequently, it is currently exploring the hydrocarbon prospectivity of the country’s onshore sedimentary basin (Voltaian basin) under a reconnaissance licence through a mix of geophysical, geological and geochemical techniques and is looking to crown our efforts by drilling a well between Q4 2023 and Q1 2024.

“Additionally, GNPC operates the shallow water GH-WB-01 block under reconnaissance licence. Over the next two years, GNPC will acquire, process and interpret 3D seismic over the block to evaluate hydrocarbon potential and drill one well,” the Chief Executive Officer (CEO) of the GNPC, Opoku Ahweneeh Danquah, said.

He said this when he presented a paper on “GNPC; A Strategic Partner for Delivery of Available E&P Projects”, at the 2023 Ghana Oil and Gas Roadshow in London.

Mr Danquah noted that the GNPC was continuously evaluating opportunities to leverage its technical competence and financial strength in “unlocking much needed hydrocarbon potential of our sedimentary basins”.

He encouraged the participants to consider the opportunities available at the roadshow and assured them that in GNPC they had a dependable technical and commercial partner working together to execute work programme leading to much needed oil and gas discoveries.

GNPC, he said, had over the years conducted regional studies on its own as well as commissioning third-party experts such as Robertson CGG and De-Goyler and Macnaughton to deepen its understanding of the Ghana sedimentary basins.

“GNPC is seeking to utilise our wealth of knowledge and expertise of the Ghana sedimentary basins in collaboration with new partners in unlocking remaining hydrocarbon potential for our mutual benefit,” he said.

“Our growth strategy led to the establishment of GNPC Explorco, a registered subsidiary, with participating Interest in six Exploration and Appraisal licences in our offshore basins. Our strategic entry into these licences is underpinned by our knowledge-based conviction of hydrocarbon prospectivity and commercial assessment of financial exposure and risk”.

As a paying partner, Mr Danquah said Explorco formed part of the contractor party and contributed experience and lessons learnt from other exploratory licences with the aim to enhancing exploration success and reducing project delivery timelines.

In 2021, he said, GNPC through its subsidiary acquired commercial interest in Jubilee and TEN fields to increase participation and revenue from both fields.

The GNPC CEO said in the early 2000’s, the corporation’s focus was amended to solely operate within the upstream energy sector, relinquishing previous downstream operations.

“Prior to the establishment of Petroleum Commission Ghana in 2011, GNPC in addition to our core mandate played pseudo-regulatory roles in assisting the Ministry of Energy in chartering the path to commercial discoveries in Ghana.”

“Subsequently, GNPC has transformed into a fully commercial state-owned entity with strategic objective of leading the sustainable exploration, development, production and disposal of the petroleum resources of Ghana, by leveraging the right mix of domestic and foreign investments in partnership with the people of Ghana,” he said and that “GNPC’s role is to ensure the efficient supply of natural gas from our oil and gas fields to Ghana National Gas Company to meet Ghana’s increasing energy needs by efficiently negotiating gas sales from our producing fields”.

Mr Danquah said as a partner in all petroleum licences, GNPC had developed diverse competencies across the entire value chain to support partners in the execution of agreed Work programmes.

Having worked with different operators over the years, he said the GNPC had developed a highly skilled and adaptable workforce embracing new technology and operating strategies of prospective partners.

He said the corporation’s strategic objective within the energy transition climate was to accelerate responsible exploitation of Ghana’s oil and gas resources to meet growing energy demand as it continued to embrace and develop green energy projects.