GNFS appeals to ECG to assess power connections in all markets 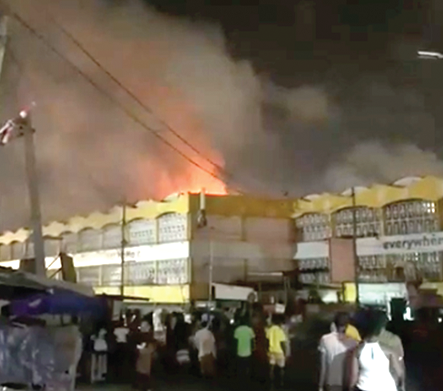 Parts of the Kaneshie Market on fire
30.5k Shares

The Ghana National Fire Service (GNFS) has called on the Electricity Company of Ghana (ECG) to conduct an assessment of all markets in Ghana in order to help deal with issues of illegal power connection.

This follows the recent fire outbreaks that have destroyed property worth thousands of Ghana cedis at Kantamanto, Kaneshie, Odawna and Koforidua markets.

In a radio interview on Accra-based Citi FM on Monday, the Public Relations Officer of the GNFS, Mr Ellis Robinson Okoe, said some of the recent market fires are partly due to illegal power connections and negligence on the part of traders in the markets.

Mr Okoe, explained that after the Kantamanto and Odawna market fires, the GNFS observed that there were many illegal power connections.

He therefore appealed to the ECG to conduct an immediate assessment and disconnect all such illegal connections in markets across the country.

“A lot of these markets have illegal connection with respect to electricity and for that matter the least carelessness and negligence on the side of users of this facility can cause fire outbreak.”

He added that carelessness and negligence on the part of users of electricity can result in fire outbreak and that the GNFS will call on the market authorities to ensure that such mistakes are not repeated.

“In most of these markets, the areas that got burnt have been secured and we are going to collaborate with the market authorities during re-construction to ensure that the very mistakes that were made to cause this outbreak will not be repeated, he added.

A number of fire outbreaks have occurred in markets across the country leading to the destruction of goods worth millions of Ghana Cedis.

Over the past two weeks, the Koforidua and the Kantamanto markets were affected by fire.

According to the managers of the Kaneshie Market Complex, it is the first time the market which was constructed in the 1970s had been hit by a fire outbreak.

The market is managed by the Kaneshie Market Complex Limited and owned by the National Investment Bank (NIB), the GCB Bank, (GCB) the State Insurance Company (SIC) and the Accra Metropolitan Authority (AMA).

It houses over 100,000 traders who deal in various goods and services.