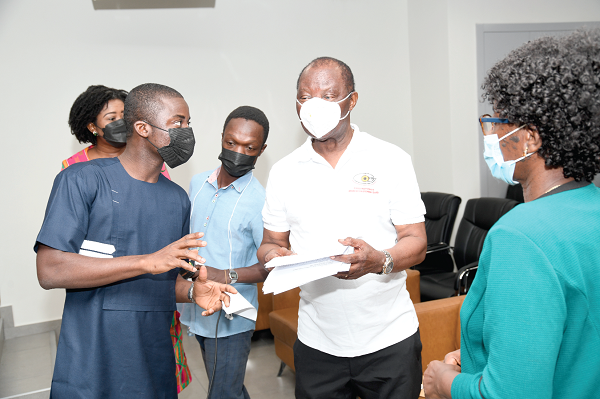 The Ophthalmological Society of Ghana (OSG) says the asymptomatic nature of glaucoma makes everybody vulnerable to the disease, which is a major cause of irreversible blindness.

As it joined the Glaucoma Patients Association of Ghana and the Ministry of Health to launch the World Glaucoma Week in Accra yesterday, the society asked members of the public to go for eye screening at least once every year to save their sight.

This year’s commemoration was dubbed “The world is bright: save your sight”.

Although not curable, if glaucoma is diagnosed at its early stages, lifetime treatment could be administered to avoid blindness.

Currently, over 700,000 people are reportedly living with the condition in the country, with over 60,000 reported to have already gone permanently blind.

An ophthalmologist and secretary to the OSG, Dr Dzifa Bella Ofori-Adjei, described the disease as a silent thief of sight, explaining that glaucoma was an umbrella term encompassing several different eye diseases that damaged the eye's optic nerve, the nerve that transferred visual information from the retina to the brain.

She said some known risk factors such as high pressure in the eye that damage the optic nerve, ageing, diabetes, dark skin, family history and myopia (short sightedness) were responsible for the condition.

She said the only way to prevent it was to go for regular eye screening to ensure early detection and treatment.

“When the condition is diagnosed in its early stages, it can be managed effectively to prevent blindness. However, people living with the condition will have to be on strict medication for life,” she said.

Dr Ofori-Adjei appealed to the government to include more glaucoma drugs on the National Health Insurance Scheme medications to ensure that affected people followed through their treatment to avoid more related blindness.

She also appealed to the Driver and Vehicle Licensing Authority to prioritise glaucoma screening as a prerequisite for issuing and renewing driver’s licenses.

She said that could reduce the number of road accidents caused by glaucoma occasioned bad vision, which, she said, was highly prevalent.

The National President for the Glaucoma Association of Ghana, Mr Harrison Abutiate, said everybody should be concerned about glaucoma because it was a silent blinding disease.

He said it had no symptoms or warning signs, and could only be managed to prevent blindness if diagnosed early.