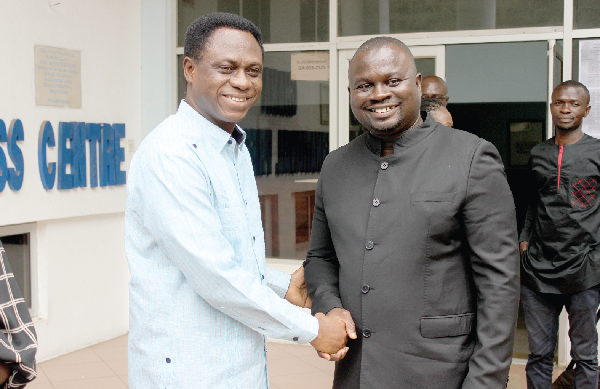 The new executive of the Ghana Journalists Association (GJA) has announced a rebranding drive to enhance professionalism, protect journalists and give the national secretariat a facelift.

The President of the association, Albert Kwabena Dwumfour, has consequently appealed to corporate bodies to support the GJA to actualise the effort.

Mr Dwumfour described his tenure as a “legacy regime”, and said the current executive was committed to “righting the wrongs” and repositioning the profession to discharge its mandate.

He made the statements in two separate meetings with the leadership of the Church of Pentecost and the Ashanti Foam Factory Limited (Ashfoam) in Accra this week.

Explaining the various initiatives under the “legacy regime”, Mr Dwumfour said as part of a rejuvenated drive, the association would set up a media support fund to enhance media freedom.

He said beyond issuing press statements when journalists came under attack, the association would tackle physical attacks on journalists head-on by taking legal actions against people who infringed on the rights of practitioners.

He said the association would embark on training and sensitisation workshops to ensure professionalism and reduce sensationalism.

The GJA, he said, would also sponsor journalists to pursue higher education to enhance their work.

Apostle Nyamekye emphasised the church’s readiness to support the association for the collective good of the country.

The church, he said, was building more prisons to help to decongest the country’s prisons as part of an initiative to bring prisoners closer to God.

“Prisoners are our clients, and building prisons does not mean we are encouraging people to commit crimes,” he said.

He added that the church would also build facilities to equip the prisoners with skills in order that they did not become a burden on society.

The Marketing and Communications Manager of ASHFOAM Ghana Limited, Nana Antwi, said his outfit would continue to support the GJA through the annual awards, and to also help paint the secretariat like it had done in the past.

He said ASHFOAM would continue to help the country by promoting the “made-in-Ghana” agenda.

While calling on journalists to fight issues such as cybercrime in the corporate world, Nana Antwi said his outfit would remain committed to helping the GJA thrive.