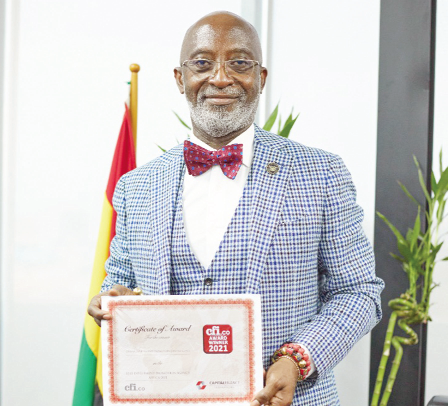 This was conferred on the centre by the Capital Finance International magazine (CFI.co).

In the citation accompanying the award, the CFI.co highlighted GIPC’s multi-level approach to investment attraction, leveraging technology, social media and other ingenious initiatives to deliver on its mandate.

It further touted the centre’s effectiveness, in fashioning and supporting groundbreaking measures that had enhanced Ghana’s investment climate. The GIPC made this known in a press release issued in Accra last Monday.

The release quoted the Chief Executive Officer (CEO) of the centre, Mr Yofi Grant, as saying that the award was a testament to “the great work being done by the centre and the progress it has made so far.”

“The centre will continually strive to do more, to ensure that Ghana cements its place as the investment hub of Africa.”

The GIPC, in recent times, upscaled its activities to keep up with changing business trends, as it sought to continually provide topnotch services to investors.

The centre adopted a dynamic system which made aggressive use of digital media, coupled with high-level stakeholder engagements and business-to-business (B2B) linkages.

The release indicated that the centre had also broadened Ghana’s investment pool, with increased advocacy for Diaspora Direct Investment (DDI), followed through by the establishment of Diaspora Investment Desk (DID).

It is also compounded with the set-up of an Aftercare Division aimed at providing post-investment services to nurture lasting stakeholder relationships.

It said in line with the global drive for sustainable investments, the GIPC collaborated with the UNDP to launch the SDG Investor Roadmap, which aimed at mobilising private-sector investments to advance the Sustainable Development Goals.

“The afore-mentioned multifaceted drive by the centre helped it to attract an impressive amount of Foreign Direct Investment (FDI) amid the COVID-19 crisis, leading Ghana to rank as the best country in West Africa to invest, per a latest report by the Rand Merchant Bank.

“It, therefore, becomes unsurprising that the GIPC has again been pronounced the best IPA in Africa, by CFI.co, for the third year running,” it added.

The prestigious award, it explained, arrived right at the time, when the centre’s CEO had been re-elected as the Director for Sub-Saharan Africa on the Steering Committee of the World Association of Investment Promotion Agencies (WAIPA).

The award adds to other respected honours the centre has received over the last few years, including the best Investment Promotion Agency in West and Central Africa for five years in a row by the Annual Investment Meeting (AIM) awards.