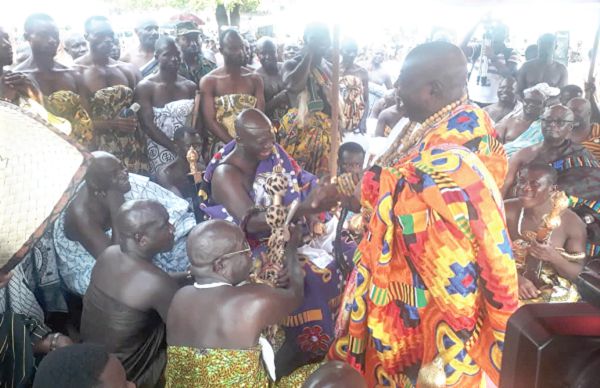 The Asantehene, Otumfuo Osei Tutu II, has emphasised the need for Ghanaians to make the attainment of peace and unity an utmost priority.

Speaking at the celebration of the last Akwasidae for the year at the Manhyia Palace last Sunday, he said: “Ghana is a unique blend of a people with a common heritage but also with diverse characteristics.

Like most African countries, managing diversities has been prone to negative influences, but we have demonstrated in our time that it is the mix of diversities which is, indeed, our greatest strength.”

“This is the belief that has guided all our endeavours within Ghana to foster a spirit of ethnic harmony and mutual trust and understanding.

It is the message we have tried to carry with us to the rest of Africa and beyond, that our common heritage is our strength and should help us withstand all the negative forces that may seek to divide us,” he added.

The Akwasidae Festival, which is celebrated by Asantes, is used to honour the ancestors of the communities. It is celebrated on a Sunday, once every six weeks.

One unique feature about last Sunday’s Akwasidae was the presence of the Awoamefia of the Anlo State, Torgbi Sri III.

Torgbi Sri, who was the Special Guest of Honour at the event, was making his maiden visit to the Manhyia Palace and he went in a big way, arriving with an entourage of 170, comprising chiefs, queenmothers and prominent people from his traditional area.

Also in attendance were the wife of the Vice-President, Mrs Samira Bawumia; the Minister of Food and Agriculture, Dr Owusu Afriyie Akoto; the Deputy Ashanti Regional Minister, Madam Elizabeth Agyemang; the Vice-Chancellor of the Kwame Nkrumah University of Science and Technology, Prof. Kwasi Obiri Danso, and many dignitaries and ordinary people who paid homage to the Asantehene as he sat in state.

Recounting how Asanteman and Anlo had lived as brothers and sisters at all times in different locations without any difficulty, Otumfuo Osei Tutu said there should be no turning back.

“My uncle, Otumfuo Sir Osei Agyemang Prempeh II, had the extraordinary challenge of managing the full integration of Asante into what is now the united Republic of Ghana.

He was always proud that statesman as he was, he was able to draw a great deal from the Awoamefia’s great uncle, Togbi Sri I, and from some of the eminent sons of the Anlo State.

“His (Otumfuo Osei Agyemang Prempeh’s) personal physician was Dr R.E.G. Amraoti, one of the finest physicians and scientists of his time; and his lawyer was the renowned B.E.A. Tamakloe, who was to become the lawyer of Asanteman during the very difficult years before independence,” the Asantehene recalled.

The Asantehene pledged to attend the Hogbetsotso Festival of the Anlos in November next year, following a request by the Awoamefia.

Despite the long years of fruitful relations between Asanteman and Anlo, the Asantehene said partisan politics was building mistrust between the two peoples.

“We have had to contend lately with the negative effects of discordant politics which seeks to sow mistrust and set brother against brother,” he said, but added: “Happily, today, we have the opportunity to slam the door firmly to the purveyors of doom and discord.”

The Asantehene said since his enthronement, he had made the development of Asanteman the focus of his reign.

“We have promoted education and health care not only for Asanteman but the larger nation state of Ghana.

But we have also been acutely aware that a pre-condition for any development in any state is peace.

That is why we have been unsparing in our endeavours to promote peace, eliminate discord and enhance harmony among all our people,” he stated.

The Awoamefia, for his part, was full of praise for the Asantehene and the people of Asante for the way and manner they had lived in peace with Anlos in the Ashanti Region and the rest of the world.

He pledged to work to deepen the already existing peace and love between Anlos and Asantes.