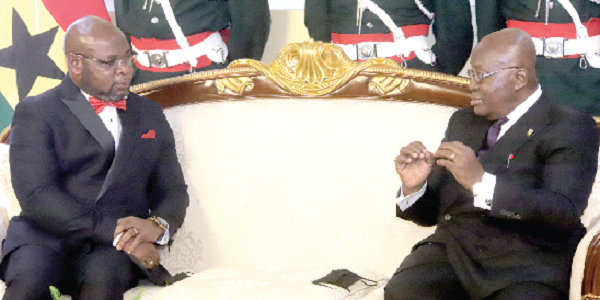 The rest are the Japanese Ambassador, Mr Mochizuki Hisanobu; the Ambassador of Greece to Nigeria, with parallel accreditation to Ghana, Mr Ioannis Plotas, and the Bulgarian Ambassador, Mr Yanko Vasilev.

The Director of State Protocol, Ambassador Samuel Yao Kumah, led them to the Credential Hall where President Akufo-Addo was seated.

The first to present her credentials to the President was the Cuban Ambassador, Mrs Garcia, who traced the historical bonds between Ghana and Cuba to many years ago, and said she would work to ensure that the bilateral relations that existed between the two countries were deepened.

Mr Youssef said Ghana and Egypt stood together as global pillars for hope, stability and security, adding that “it is this common bond that allows us to stand against all challenges and thrive”.

Mr Bindang of Equatorial Guinea said his country counted on Ghana’s support to accelerate its development and added that he would work towards deepening the ties that united the two countries, especially in the economic, social and cultural sectors. 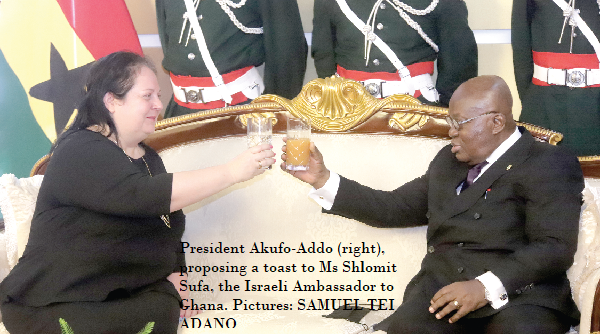 The Israeli Ambassador, Ms Sufa, said the increasing collaboration that had led to a spike in business opportunities between Ghana and Israel would be continued.

She added that Israel was working on linking Israeli businesses with their Ghanaian counterparts in sectors such as Fintech, cyber security, innovation, agriculture, water, health and homeland security.

The Greek Ambassador, Mr Plotas, said President Akufo-Addo’s attachment to the principles of good governance, such as transparency, accountability, the rule of law, due process, empowerment and respect for human rights, had shaped Ghana’s democratic credentials. 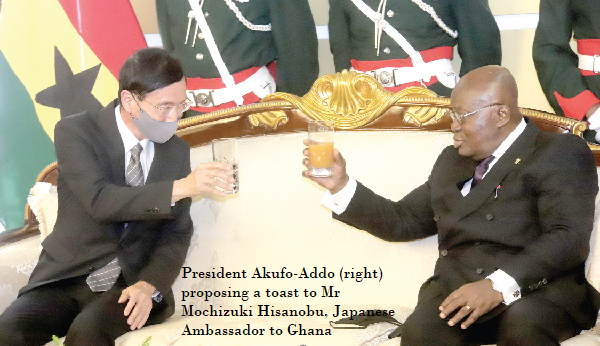 For his part, Mr Hisanobu said he was looking forward to continuing working with the government towards achieving the Ghana Beyond Aid agenda and other strategies for the sustainable development of the country.

When it was his turn, the Bulgarian Ambassador, Mr Vasilev, said there were ongoing negotiations on a draft protocol for the re-establishment of the mechanism of bilateral consultations between the Foreign Affairs ministries of the two countries.

President Akufo-Addo reiterated Ghana’s commitment to strengthen bilateral relations with their respective countries, especially in the areas of the economy, technology and innovations to boost investment in Ghana.

“Ghana will continue to play its role to engender world peace and security, including the growing threat of terrorism,” he said.