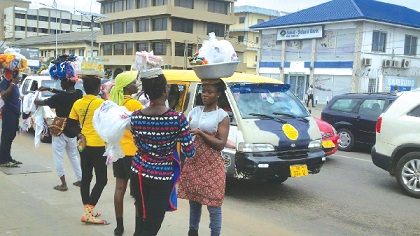 Some Ghanaians have expressed displeasure at the intended increment in the price of sachet water from 20Gp to 30Gp, representing a 50 per cent increment

most consumers, sachet water is the only source of drinking water and a rise in its price will affect their daily expenditure.

In an interview with the Daily Graphic, Ms Esther Okai, a food vendor and mother of four, said: “If we should be sincere with ourselves, the initial price of 20Gp is expensive. If we have to pay more for drinking water, then I will also consider reviewing the price of my food.”

For his part, Mr Kwame Adu, a cobbler who plies his trade at the Kwame Nkrumah Interchange in Accra, claimed that he drank not less than 12 sachets a day and, therefore, he could not afford to spend about GH¢4 daily on water.

“This means I will have to reduce my consumption, which will be a difficult thing to do because water is life,” he added.

Some pupils of the Mantse Tackie Liberty School at Adabraka said any such increment would compel them to begin sharing water with their schoolmates.

One of them, who identified himself only as Eric, claimed that his parents gave him GH¢2 for his daily expenses in school and that he could not afford to spend beyond 20Gp of that on water.

“I eat once in school and drink only one sachet of water. Maybe I will tell my parents to increase my the money given for school. If they refuse, then I will have to share with my friends,” he said.

The National Association of Sachet and Packaged Water Producers (NASPAWAP) announced the intended increment in a statement issued last Tuesday.

The association explained that the increment was due to the rising cost of production and distribution.

According to the National Director of Corporate Affairs of the association, Mr Kwame Agyapon Ntra, who issued the statement, the new price would take effect from November 12, 2018.

Under the new regime, the price of a bag of sachet water will also be increased from GH¢3 to GH¢3.50.

Meanwhile, some retailers of sachet water have welcomed the decision, saying it will help them break even.

According to them, the sale of water under the scorching sun was a stressful venture and so the increment would motivate them to stay in business.

“Selling water under the sun and jostling in between cars is a very stressful experience. We are happy about the increment and we hope that customers will understand the situation,” Ms Grace Oppong, who plies her trade on the Graphic Road, stated.

However, a sachet water wholesaler based at Adabraka, Abigail Kotei, opined that the increment could lead to a drop in sales and reduced profit.