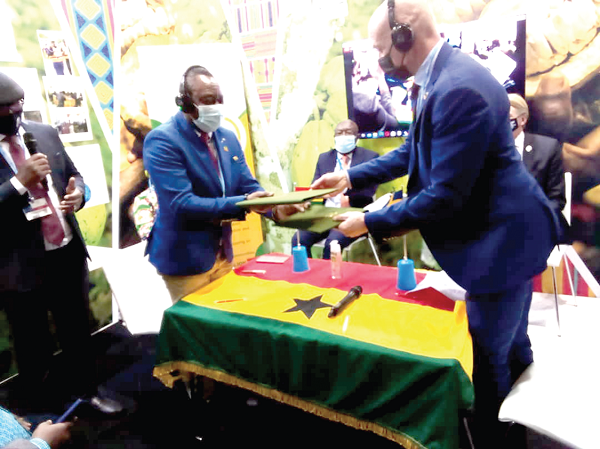 Ghana last Tuesday signed memoranda of understanding (MoU) with two entities in Switzerland and Sweden to actualise the Paris Agreement that provides parties the opportunity to engage in voluntary cooperation and use internationally transferred mitigation outcomes for the attainment of their national climate pledges.

The entities are Mercuria Energy Trading of Switzerland and the Swedish Energy Agency, while the Environmental Protection Agency (EPA) represented Ghana.

The cooperation, among other things, seeks to promote renewable energy, improve domestic cooking and involve private sector businesses in the fight against climate change.

The Paris Agreement is a legally binding international treaty on climate change.

Its goal is to limit global warming to below two degrees, preferably to 1.5 degrees Celsius.

In the Mercuria MoU, the parties hope to build the capabilities of local businesses to invest and implement greenhouse gas emission reduction projects in areas, including alternative waste management, oil and gas, transportation, marine and coastal water conservation.

At the signing ceremonies which took place at two separate events at the Ghana Pavilion at COP 26, the Executive Director of the EPA, Dr Henry Kwabena Kokofu, signed for the EPA, while the Managing Director-Africa of Mercuria Energy, Mr Laoye Abiola, initialled for the organisation.

The Director General of the Swedish Energy Agency, Mr Robert Andren, signed for the organisation.

Dr Afriyie said the MoU was to establish the basis for the two countries to cooperate on mutual areas of interest related to the implementation of Article Six of the Paris Agreement.

Moreover, he said, it was to identify key processes and elements that might inform the bilateral negotiations of a legally binding framework agreement to facilitate transactions under Article Six.

For his part, Mr Bolund expressed the hope that the partnership expressed through the MoU would showcase how Article Six cooperation could promote sustainable development.

He believed that it would also ensure environmental integrity, transparency and robust accounting.

Mr Abiola said the MoU was also to build on the existing agreement between Ghana and Switzerland.

For his part, Dr Kokofu said it was about time such bilateral agreements brought countries together to turn the negativities of climate change into business activities where they could create wealth and employment.

"They are very important and good milestones.

We are going to work hard at the EPA and the MESTI to realise the golden dreams of the two MoUs.

We are going to iron out the legal binding agreements of which they will become operational early next year," he emphasised.