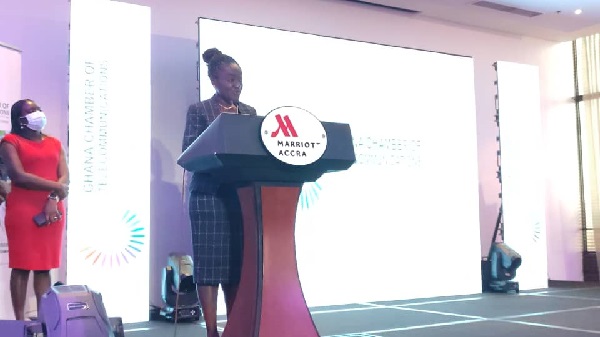 The Fraud Control Dashboard (FCD) launched by Vice President Mahamudu Bawumia in April 2021 has so far aided in the blacklisting and blocking of 23,000 subscriber identification module (SIM) cards and mobile devices that were being used to perpetrate cyber fraud in the country.

This was disclosed by the Minister of Communications and Digitalisation, Mrs Ursula Owusu-Ekuful today at the launch of the 10th anniversary of the Ghana Chamber of Telecommunications today in Accra.

In an address read on her behalf by the Deputy Minister of Communications and Digitalisation, Ms Ama Pomaa Boateng, the Minister congratulated the efforts of the Chamber in helping the government to establish the Central Equipment Identity Management System which was used to set up the FCD.

"When I spoke at the Chamber Mobile Technology for Development Conference in April this year, I congratulated the Chamber for complementing the efforts of government which is establishing the Central Equipment Identity Management System by setting up the Fraud Control Dashboard to help eradicate fraud," Ms Boateng said.

"I am told that the FCD that was launched by Vice President Bawumia has blocked over 23,000 devices and blacklisted about the same number of ID's used by fraudsters. This is what we can achieve working together".

Known as the Fraud Control Dashboard, the system was introduced by Ghana's telecommunications industry in partnership with the Bank of Ghana and the Police Service in April 2021.

It is used to block subscriber identification module (SIM) cards and mobile devices, as well as blacklist identification numbers that are connected to fraud or general crime-related cases.