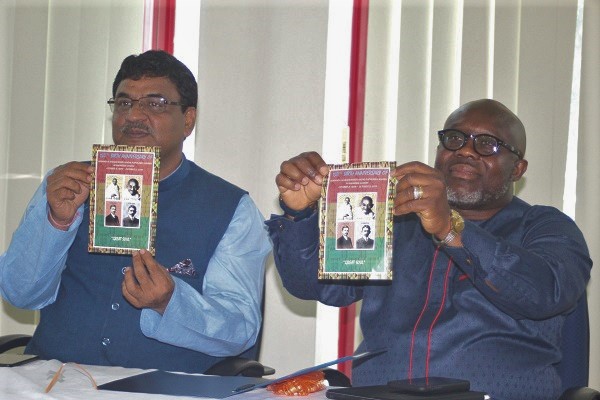 The Ghana Post (GP) and the Indian High Commission have launched postage stamps on Mahatma Gandhi to commemorate the 150th birthday anniversary of the Indian freedom icon.

The four separate stamps, which will be sold at GH¢4 each, depict different photos of Mahatma Gandhi, with the name Ghana embossed on top of them.

The stamps also have Kente and Adinkra symbols embedded in the background to portray the bravery, humility, royalty and important personality of Mr Gandhi.

The stamps were jointly unveiled by the Deputy Minister of Communications, Mr George Andah; the Board Chairman of the GP, Mr George Afedzi Hayford, and the Indian High Commissioner to Ghana, Mr Birender Singh Yadav.

Explaining the decision to unveil the stamps, Mr Hayford said the idea of raising high the image of Gandhi was sold to the GP by the Indian High Commission, a proposal he described as “worth partnering.”

“We did not hesitate and after agreeing on protocols, we sought permission from the Postal and Courier Regulatory Commission to issue the stamps,” Mr Hayford said, while expressing appreciation to all stakeholders whose efforts had made the printing of the stamps a reality.

Comparing Mr Gandhi to Ghana’s first President, Dr Kwame Nkrumah, he described Mr Gandhi as a man who made peace an everyday message.

“Instead of violence, Mr Gandhi introduced civil disobedience as a means to make one’s case heard,” he said, pointing out that since his death in 1948 his teachings and writings had greatly influenced liberation movements globally.

Mr Yadav thanked the government, the Ministry of Communications and the GP for releasing the stamp on the 150th birthday anniversary of Mr Gandhi whom he described as a father of India who envisioned a self-reliant India that was not only free from poverty, discrimination and social upheavals but also a country that occupied a place of pride and dignity in the world.

He noted that Mr Gandhi’s principles of truth and non-violence to solve issues had inspired many across the world to believe in non-violence as the biggest weapon to address concerns.

“If we follow the principle of truth and non-violence, we will be able to face any challenge which we encounter in life,” Mr Yadav said.

“On this important occasion of honouring the 150th birthday of Mr Gandhi, let us collectively pledge to honour Mahatma by working together to realise his vision for a better world that is inclusive, harmonious peaceful and prosperous world,” he said.

Mr Andah for his part encouraged Ghanaians, particularly the youth, to stay away from violence and resort to non-violence as the best methods to seek answers to their problems.

“We can fight without holding a single weapon,” he added.