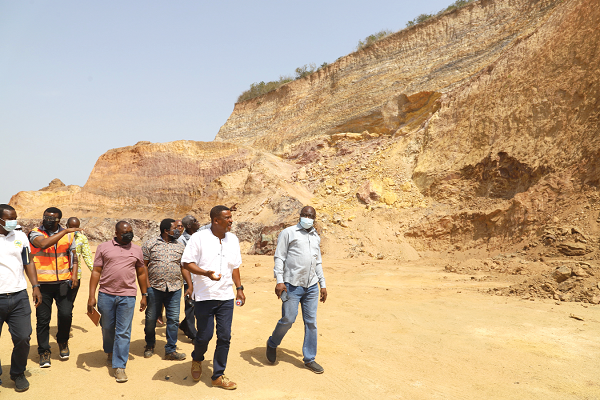 Ransford Sekyi (4th from left), acting Deputy Executive Director in charge of Operations at the Environmental Protection Agency (EPA), Michael Ali Sandow (right), acting Director of Mining Department of the EPA, and other officials inspecting the damages caused by the sand winners at the Weija Ridge in Accra. Picture: GABRIEL AHIABOR Follow @Graphicgh

The Ghana Geological Survey Authority (GGSA) has warned that people around the Weija Ridge and Reservoir are living on a time bomb which is ticking away every day as the human activities on the mountains pose a great risk to their lives and property.

The authority explained that the sand winning and rock blasting activities on the ridge had gradually weakened the hills along the Accra-Cape Coast road, particularly around Weija in the Ga South municipality.

A Principal Seismologist of the GGSA, Nicholas Opoku, said the activities posed a great threat to the inhabitants around the area.

He gave the warning when a team of officials from various ministries and commissions in charge of the environment paid a visit to the Weija Ridge and Water Reservoir last Friday.

He said the Weija Ridge was part of the Akuapem Fault Zone, a line along which seismic waves occur, which accounted for the occurrence of earthquakes in the area.

He added that the hills in that area were geologically weak because they had a lot of fractures.

"What is making the problem much more difficult is the mining and sand winning activities going on here," Mr Opoku said.

He added that those activities exposed the soft rocks, which had undergone serious erosion, and should the activities continue, it would completely erode the middle rocks and cause the hills, together with the buildings on them, to collapse.

"The risk is higher here, since there are a lot of buildings on the mountains," Mr Opoku added.

He warned people living in other highlands in the country not to engage in indiscriminate sand winning as the risks would "be difficult to manage".

The team was made up of representatives from the Environmental Protection Agency (EPA), the Ministry of Lands and Natural Resources, the GGSA and the Ghana Chamber of Mines.

The acting Deputy Executive Director of the EPA in charge of Operations, Ransford Sekyi, stated that the purpose of the visit was to assess the damage to the areas and decide on the way forward to salvage the situation.

Previous visits, he said, had been made in 2014, where the challenges were identified but their warning did not yield the expected results.

"Whenever it rains, the mud from here washes down to the main Accra-Cape Coast road. It has become an annual ritual," Mr Sekyi said.

He explained that though the situation had worsened, a more permanent solution would be sought to address it.

Mr Sekyi mentioned that stakeholder meetings would be held to proffer ways to resolve the issues.

He added that to salvage the situation, some buildings on the ridge as well as below it would have to be demolished, which the assembly was to oversee.

"The only thing we see them do is that during downpours, they de-silt, but that is treating the symptoms of the challenge. We have to actually uproot the problem," the EPA operations head said.

Mr Sekyi said the agency had designs to rehabilitate the ridge, adding that together with all stakeholders, including the residents around the ridge, a sustainable plan would be implemented.

The Municipal Coordinating Director of Ga South, Mr Isaac Kwakye, stated that funding was a major hindrance to the progress of work on the ridge as the assembly did not have the huge amounts of money involved.

"The assembly can work to an extent, so we always collaborate with other agencies such as the EPA and the Lands Commission to help us with some of these activities," Mr Kwakye said.