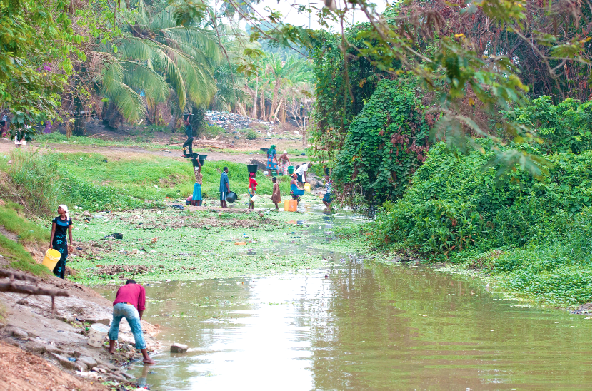 Some people drawing water from a polluted river
30.5k Shares

This year’s World Water Day was yesterday commemorated in Accra with a call for collaboration among stakeholders to ensure availability and improved quality of water in the country.

The Minister of Sanitation and Water Resources, Ms Cecilia Abena Dapaah, who made the call, said the proportion of rivers with fairly good ambient water quality or better as of the end of 2016, stood at 39 per cent.

The event, which was on the theme: “Valuing water,” has been observed on March 22 every year since 1992, and focuses on the importance of freshwater and its sustainable management.

Besides, it is also used to raise awareness of 2.2 billion people who are living without access to safe water sources globally.

According to the UN, global water demand is likely to rise by over 50 per cent by 2040.

The minister made the call at a press conference in Accra yesterday as part of activities to celebrate the day.

She expressed concern over pollution of water bodies in the country and said such practices were adding to the cost of chemicals for the treatment of water and “it is the final consumer — you and I, as well as our industries who ultimately bear the health and economic costs”.

“Obviously, pragmatic and collaborative measures and actions are needed to reverse the situation,” Ms Dapaah added.

The minister further said water was under extreme threat from a growing population and the increasing demands of agriculture and industry.

Besides, she said pollution was worsening the quality of water while climate change was making rainfall more erratic “therefore, we must value water more than its price”.

“The immense value of water for households, culture, education, economy and the environment should not be overlooked, to avoid mismanaging this finite, irreplaceable resource,” the minister said, adding that water was the most demanded commodity in this era as it played a key role in human existence.

“Sadly, our water ecosystems are not in a healthy state. It is common knowledge that illegal mining ‘galamsey’, in particular has affected the quality of water bodies, especially within the southwestern river system, which includes the Tano, Bia, and Ankobra river basins as well as the Pra basin and its Offin and Birim tributaries,” Ms Dapaah added.

The minister said understanding the importance of water would help achieve Goal Six of the UN Sustainable Development Goals.