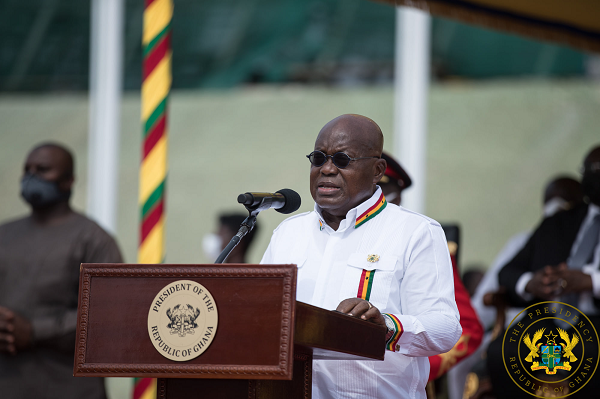 President Nana Addo Dankwa Akufo-Addo has charged Ghanaians to put their shoulders to the wheel in rebuilding a resilient nation capable of withstanding future external shocks such as the COVID-19.

Addressing a brief, simplified and modified Independence Day parade at the forecourt of the Jubilee House last Saturday, the President said the government was putting in measures to revitalise and transform the economy and that would require the effort of all to be successful.

He explained that steps to revive and transform the economy were hinged on the GH¢100 billion Ghana Cares Obatanpa programme, which he described as the nation’s drive towards the rapid industrial transformation.

For the first time in the history of Ghana’s Independence Day celebration, which is always replicated at the regional and the district levels, the commemoration was reduced to a brief, simplified and modified version at the forecourt of the Jubilee House.

The government suspended the nationwide commemoration of this year’s Independence Day and all its related activities in the regions, metropolises, municipalities and districts due to the second wave of the COVID-19 pandemic in the country.

The abridged ceremony at the Jubilee House was, therefore, in line with precautions against spreading the COVID-19, in the face of continuous infections and the discovery of two new deadlier variants in communities.

Some personalities, including the Vice-President, Dr Mahamudu Bawumia; the Chief Justice, Justice Kwasi Anin Yeboah, the Chief of Staff, Mrs Akosua Frema Osei-Opare (who was invited for the lighting of the perpetual flame) and members of the Diplomatic Corps, participated in the event.
Others were service commanders.

The national celebration, which was usually held at the Black Star Square in Accra, and in recent times at the Ashanti Regional capital, Kumasi, and the Northern Regional capital, Tamale, usually had the participation of hundreds of military officers, men and women, schoolchildren, organisations, market women and traders and identifiable groups, who march past for hours.

This time around, only eight military officers and 29 men from different services were on parade.

Immediately after the military drills and other displays, the National Salute was played, paving the way for President Akufo-Addo to address the parade, during which he also explained that his representative would soon provide Parliament with further details on the measures to be taken to spur on the process of economic recovery.

He encouraged Ghanaians, saying in a year, the benefits of economic recovery would begin to show, as the Ghana Beyond Aid agenda would be accelerated and the nation would gain its pride of place as the fastest growing economy not only in Africa but also the world.

He expressed confidence that by next year the country should be processing more raw materials to help create jobs for the youth, with more children having access to education, while each district would have decent affordable health care.

“Let us not allow our energies to be sapped by the failures of the past or the challenges of today. Let us embrace today's challenges as opportunities for a brighter future.
“Let us redefine our sense of national responsibility and remove any doubt some may continue to have about our ability to manage our own affairs,” President Akufo-Addo stated.

He charged Ghanaians to devote themselves to the freedom and welfare of the country, which he admitted was an arduous task.

“I'm confident that with dedication, hard work, honesty and integrity, we can fulfill the dreams and aspirations of the founding fathers of our nation,” he stated.

“This is not beyond us if we put our hearts and minds to it. We, who are the first to gain our independence in colonial Africa, can make it and protect our heritage and environment,” the President stressed.

He said Ghanaians had, over the years, been working to lift the standard of living of the people and help construct an economy that was capable of creating a society of opportunities for all.

Although that had taken some time, he said, he was of the conviction that Ghanaians were generally optimistic of attaining greater heights if they worked at it.

President Akufo-Addo said freedom and the cultivation of democratic values were strengthening the country’s determination to bring into being a new Ghana that was neither a pawn nor a victim of the world order but a country where respect for individual liberties, human rights, the principles of democratic accountability and the dictates of social justice were deepened.
He said it had been recognised that the biggest challenge confronting the nation was being able to put it on the path of sustained progress and prosperity, necessary for enhancing the well-being of every Ghanaian.